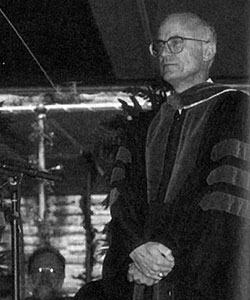 I am delighted to announce that the winner of the Welch Award for 1995 is professor of politics & government, Dr. Craig Ramsay.

Dr. Ramsay holds a bachelors degree from the University of Michigan where he graduated magna cum laude in political science. His masters degree and Ph.D. are also from the University of Michigan where he was a teaching fellow in the mid-1970’s. Before coming to Ohio Wesleyan in 1981, he taught political science at Illinois College where he advised delegates to the model state government and the model united nations; and here, he has moved through the ranks quickly, becoming a full professor in 1992. He is widely published in the areas of American federalism, public policy, and Canadian politics. His research has been supported by grants from the Earhart Foundation and from the Canadian government’s Canadian Studies Faculty Enrichment Program. In recent years, his work has focused on federal health care policy-making, culminating in a major book on U.S. health policy interest groups to be published this year by Greenwood Press.

Dr. Ramsay is, according to his students and in their words, “one of the toughest yet best professors on campus,” “clear,” “fair,” “challenging,” “highly organized,” “extremely interesting,” “extremely knowledgeable,” and “incredibly learned.” His courses are described by students as “well-planned,” “provocative,” and “stimulating.” Said one student: “The manner in which he presents the material and his enthusiastic teaching style made me curious to learn more.” Another said: “He spurred my interest and was very clear when dealing with complicated topics; I give him a thumbs up!”