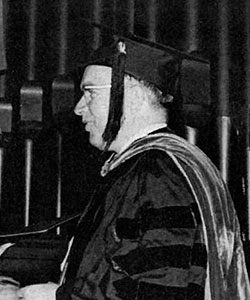 David H. Jennings, 75, of 42 Westgate Drive, second winner of Ohio Wesleyan University’s top teaching award in 1964, died Monday (May 10, 1993) at Grady Memorial Hospital. A professor emeritus of history, he specialized in the foreign policy   of   the Wilson and Harding administrations.

He graduated from Bates College. Jennings earned his master of arts degree at Syracuse University and his doctorate at Ohio State University.

Before joining the OWU faculty in 1946, he taught at Pembroke Academy in New Hampshire and at Wilbraham Academy in Massachusetts. Jennings taught at OWU from 1946 to 1981, including six years as department chairman. A former prep school baseball and basketball coach, he served 23 years on OWU’s Board of Control of Athletics.

Jennings taught at Ohio State University in the summer of 1966 and lectured at the Brookings Institution in 1968. He was a frequent speaker at YMCA and service club meetings. He was co-author of a textbook, Values and Policy in American Society, and its accompanying guide, Readings in American Society, used in an interdepartmental course at OWU.

Surviving are his wife, Olive; a daughter, local dance instructor Shirley Jennings of the home; a son, Richard of Marysville, Mich.; two grandchildren; two sisters, Florence and Ruth Jennings of Utica; and his brother, James Jennings of Utica.

Visiting hours will be Thursday from noon to 1 p.m. at Robinson Funeral Home, where services will be held immediately following, with the Rev. Robert Spencer of Stuart, Fla. attending to officiate.

Burial will be in Oak Grove Cemetery.

Memorial contributions may be made to the David Jennings Speaking Fund in care of Ohio Wesleyan University.