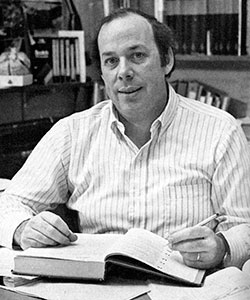 I am delighted to announce that the winner of the Welch Award for 1994 is professor of psychology, Dr. David Robbins.

Dr. Robbins holds a bachelors degree from Lycoming College, and a masters degree and Ph.D. from the University of Delaware. Before coming to Ohio Wesleyan in 1973, he was the principal investigator and director of research at the Eye Research Foundation, and he also taught at the NIH/Federal City College.

Currently the chair of the psychology department and of our university governance committee, Dr. Robbins has served for 25 consecutive years, 21 years at Ohio Wesleyan, as the principal investigator on a series of government research contracts; currently, and through 1996, on research sponsored by the U.S. Army Medical Research and Development Command. Not even counting the literally hundreds of technical reports and notes written for government publications, over 75 professional publications have resulted from his work. He is one of those rare individuals who has managed to build a research program, of the caliber usually seen only at large research institutions, at a small liberal arts college. In addition, he has built a program which benefits our students rather than distract him from student-oriented activities.

He is, according to his students and in their words, a “dynamic,” “creative,” “helpful,” “enthusiastic,” “fair,” “honest,” “humorous,” and “entertaining” teacher. “I have loved his classes,” said one. “I’ve never before been so excited by a course; Dr. Robbins gets credit for my new-found love of psychology.” Another wrote: “I am a senior; if I ever decide to be a professor, I would like to be as effective and understanding as Dr. Robbins.”

What more, after all, can one say! David, congratulations!

The Sherwood Dodge Shankland Award for the Encouragement of Teachers went to Andereck, associate professor of physics and astronomy.

Each honor, selected secretly by a committee of faculty and students, includes a cash prize.

The Welch Award, sponsored by the Greater New York Ohio Wesleyan Alumni Association, honors Bishop Herbert Welch, who was Ohio Wesleyan president from 1905-16. The award, first made in 1963, goes to a faculty member who has “demonstrated distinguished service in teaching which has made significant contribution to the academic climate at Ohio Wesleyan University.”

The Shankland Award, established in 1963-64 by Mr. and Mrs. William H. Ryan of Sacramento, Calif., is intended “to identify, encourage, and honor Ohio Wesleyan faculty members with high potential as teachers.”

Robbins, who also chairs the psychology department, joined the OWU faculty in 1973. He becomes only the sixth individual to receive both of the university’s top teaching awards, receiving the Shankland honor in 1980.

The Delaware, Ohio, resident has conducted and published results of his research in lasers and vision damage for more than 25 years with grants through the U.S. Surgeon General’s Office. Robbins teaches a number of subjects, from introduction to psychology to courses on research methods, neuroscience and maturity and age.

Robbins earned a bachelor’s degree from Lycoming College and a master’s and a Ph.D. from the University of Delaware.

Acting OWU President William Louthan said in presenting the award to Robbins that the professor “has built a research program, of a caliber usually found only in large research institutes, that benefits his students instead of distracting from his teaching.”

Shankland Award winner Andereck came to Ohio Wesleyan in 1985 after earning a bachelor’s from Southwest Missouri State University and a Ph.D. from Rutgers.

She teaches elementary and contemporary physics and electromagnetic theory, as well as astronomy courses on cosmology.

Louthan noted that Andereck, an accomplished researcher, has gained a reputation as an outstanding teacher as well. “Her students say that she makes the material interesting which encourages them to come to every class. One noted, ‘we need more like her.’ I agree,” Louthan added.

The Executive Committee of the OWU Board of Trustees unanimously endorsed Robbins’s appointment as interim president in May, and he officially assumed responsibilities on July 1. This isn’t the first time he has stepped up to fill an interim position — in 2005-2006, he agreed to serve as interim provost, and was later named provost after a national search.

Robbins says his dedication to Ohio Wesleyan makes it easy for him to want to take on leadership roles. “I believe very strongly in the mission of this University,” he says. “I enjoy the challenges and rewards of my work, and most of all, the great people who define this institution. I’ve come to really love OWU as if it were my alma mater. Ohio Wesleyan is an integral part of my life, it is my home, and I want to do all that is in my power to see it succeed.”

Robbins says his current interim appointment as president will not become permanent. “Let me assure the OWU community that I look forward to a very successful national search for a new president and believe there will be plenty of excellent and well qualified applicants,” he says. But that doesn’t mean he won’t be busy during his interim presidency.

His plans include working on the Rickey, Ross, and Lilly campaigns, preparing for a new presidency, and preparing for the upcoming Higher Learning Commission accreditation. “We also have an ongoing facilities master plan that will be completed during the 2007-2008 academic year,” says Robbins. “This plan will provide some background for possible future renovation and capital projects on the residential, academic, and athletic sides of the campus.”

As Robbins fulfills his new duties as interim president, some of his provost duties will shift to Chuck Stinemetz, dean of academic affairs. “Chuck and I are still working on a new division of responsibilities,” he says.

Regardless of his title, Robbins is excited about the coming year at Ohio Wesleyan. “The best part of working at OWU is interacting with a very dedicated and terrific group of administrators, faculty, and staff to provide the highest quality liberal arts education possible to a wonderful and diverse student body. It’s extremely rewarding to watch these young students grow and eventually join our very loyal and supportive alumni.”