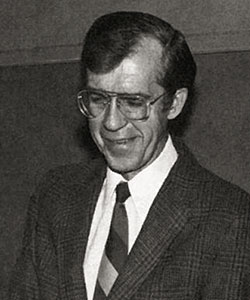 Professor Osborne’s major professional interest is the literature of the British nineteenth century. Holding a joint appointment in both English and Humanities­Classics, he has taught freshman composition, the Romantics, the Victorian Age, and “Public and Private Lives,” a Humanities-Classics course examining the tension between the private and social selves. His scholarly work has focused on Matthew Arnold, particularly on his position as Inspector of Schools. Professor Osborne’s discovery of extensive correspondence between Arnold and the Education Office contributes significantly to an understanding of this little-known aspect of Arnold’s career.

During his thirty-two years at Ohio Wesleyan, Professor Osborne has served on a variety of major committees, including the Academic Policy Committee. Because of the high esteem he enjoys among his colleagues, he has often been tapped for leadership roles. He was the faculty chair of the Long-Range Planning Committee that re-examined Ohio Wesleyan’s curriculum after the decade of the sixties. He was similarly called upon for leadership when the Ohio Wesleyan Summer School sought new directions. And in the early eighties, he was selected to serve on the crucial Committee on a Smaller University. In the English Department, he coordinated the Freshman Composition Program for several years; and he has served on numerous committees in both departments of which he is a member.

A poet whose witty readings invariably delighted students and faculty alike, Professor Osborne often served as a poetry judge for the English Department literary awards. He frequently contributed poems to the OWL, the Ohio Wesleyan Literary Magazine. Professor Osborne has been a staunch supporter of the Ohio Wesleyan athletic teams, going so far as to provide two sons to the University’s football and baseball programs.

Professor Osborne’s excellent teaching was recognized early in his career: he was honored with the Sherwood Dodge Shankland Award for the Encouragement of Teachers in 1965.

Guided by the Arnoldian principle of teaching the best that has been known and thought, he inspires the affectionate loyalty of his students. Many a freshman, unsolicitous of his or her own academic welfare, has received an invitation from Professor Osborne to come to his office for advice and counsel. Over the years, his many students have appreciated this genuine concern for their welfare, and his compassion as well as his erudition and wit. In those students, Professor Osborne’s legacy as an outstandingly gifted teacher will persist far beyond his retirement.