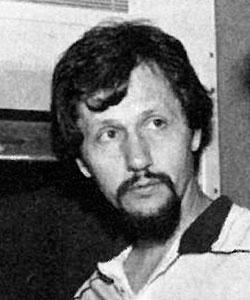 Denny Radabaugh was born in Detroit, but his family moved to Hillsdale, Michigan when he was four so that he could receive his education in a non-urban environment. And so he did, perhaps not wholly in the manner anticipated by his folks. He and his friends roamed the undeveloped land near his home, happily exploring the nearby swamp and fish hatchery ponds. Summers included fishing trips in northern Michigan as well as canoe outings with his father. His appreciation of nature and life forms grew quite naturally. He enrolled in Albion College where he earned his B.A. in biology and then enrolled in the Wildlife Biology program at The Ohio State University. He rapidly discovered this was not the part of biology that interested him, but instead found his curiosity piqued by animal behavior. He subsequently transferred to the zoology program at OSU where he earned both his M.S. and Ph.D.

The opportunity to start sharing what he’d learned came immediately after his graduation when he accepted a temporary, one-year replacement position at Ohio Wesleyan University in 1970. When the students requested a new course in animal behavior, Denny happily obliged. Recognizing a good thing when they had it, the University subsequently hired Denny for a tenure-track appointment and the rest, as they say, is history. Denny made animal behavior a permanent part of the curriculum and continued to teach that course throughout his career here. In addition, his breadth of knowledge enabled him to teach such courses as vertebrate natural history and human anatomy and physiology as well as countless seminars on topics ranging from conservation biology to spiders to art and natural history to pseudoscience. But always, Denny has provided a backbone to the department in that his regular repertoire of offerings always included either or both of the main introductory courses for zoology majors. One delightful consequence has been that year after year, new classes of students have experienced his special teaching talents. Indeed, students’ appreciation of his skills led to his receiving the Welch Meritorious Teaching Award in 1990.

Among the other courses Denny has taught, one in particular stands out - Island Biology, one that includes a field trip to the Galapagos Islands. Denny participated in the first ever Ohio Wesleyan trip to the archipelago in 1974 when the experience was tied to a seminar. He subsequently established the class as a full-course offering and first taught it in 1977. Since then, he has returned to islands at regular intervals and shared the magic of the islands and their biota with many series of students, including a group who will be departing in a few days. Hopefully they’ll avoid some of the extras that have occurred on some of his earlier ventures, e.g., exiting down the emergency slides at a remote part of the air field in Panama in response to a bomb threat, or spending extra time in Ecuador due to lost passports.

Denny has participated in many roles within the department and across the wider campus. He spent some 30 years as the pre-veterinary sciences advisor and nearly a decade as the chief health professions advisor. He chaired the department repeatedly, including (thankfully) the final five years of his career, a time of great flux as a succession of his colleagues have retired and replacements needed to be sought, attracted, and mentored. His campus-wide committee service has included time on several different committees, most notably a couple of terms on the Faculty Personnel Committee, a committee that he also chaired.

Throughout his tenure here, Denny has exhibited an incredible capacity to continue to expand his horizons and add new areas of specialty.  Whether it was researching the effects of parasitic infections on the behavior of freshwater fishes, or taking a course on spider biology at the Highlands Biological Station, or exploring conservation programs while on sabbatical to New Zealand, Denny has continued to broaden his background.  Now, in retirement, he intends to continue in this same manner as he extends his education in areas including philosophy, classic literature, and Spanish.  Also of interest to him is enhancing his self-sufficiency by using some of his available time engaged in activities such as gardening, canning, freezing and baking, not to mention practical maintenance skills. And, of course, there will be time for sharing adventures and experiences of all kinds with his wife and best friend, Sally Waterhouse.

Always a quietly effective diplomat, respected and respectful, within the department in which he has been such a reliable team player. Surely he represents the last of the breed of generalists who once constituted the majority of the faculty within the zoology program.

Written by A. John Gatz, Ph.D., Professor of Zoology