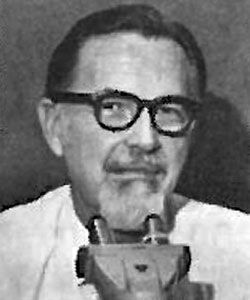 His career included service as acting university president, the authorship of two textbooks, and botanical research in Alaska and India.

He was a botanist for the American Geographical Society’s Alaska Glacial Research Expedition in the summer of 1959; acted as botanist with the Ohio State University Institute of Polar Studies’ Glacial Expedition to Alaska in 1961; was a visiting professor at Kerala University in India in 1964; worked with the University of Bombay, India, 1965-66; and was a consultant for the State Department Educational Mission to India, during the summers from 1964-67. He wrote two textbooks, including The Science of Genetics: An Introduction to Heredity.

During World War II, he served as a meteorological officer with the Navy in the Pacific theater. He taught at the University of Minnesota from 1945-46 before coming to OWU.

A memorial service will be held at Asbury United Methodist Church on Saturday at 3 p.m., with the Revs. James Leslie and Alan Kimber officiating.

Memorial contributions may be made to the Botany Department at OWU or to Hospice at Grady, 561 W. Central Ave., Delaware.

Arrangements are being handled by Robinson Funeral Home.