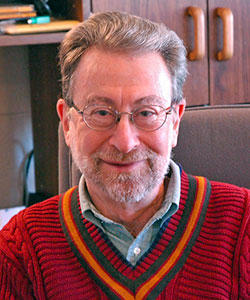 I am delighted to announce that the winner of the Welch Award for 1997 is professor of psychology, Dr. Harvey Freeman.

Dr. Freeman received his bachelor’s degree from Miami University, and his master’s degree and the Ph.D. from The Ohio State University. He came to Ohio Wesleyan twenty-eight years ago, in 1969, as an assistant professor. He was promoted to associate professor in 1974 and to full professor in 1981.

Dr. Freeman has been a highly and continuously productive scholar throughout his twenty-eight years at Ohio Wesleyan, publishing the results of his research in a variety of prestigious professional journals. Early in his career, in the turbulent late 1960’s and early 1970’s, he published work on campus demonstrations and on the generation gap. In more recent years, his work has been mostly in the areas of gender roles and effects, sex role stereotypes, sports psychology, and personality attributions. He has also published works on a variety of pedagogical issues ranging from computer-assisted instruction to gender roles in teacher evaluations.

Dr. Freeman is, according to his students, and in their words: an “enthusiastic” and “interesting” teacher who is “innovative,” “caring,” “fair,” and most of all, “fun.” Said one student, Dr. Freeman is “an incredible teacher; he makes learning fun, but is challenging as well.” Said another, “He makes you think and you have no choice but to get involved.” And another said, “This is the only class I’ve taken where the class itself has generated a feeling of warmth and camaraderie.” Yet another said: “I absolutely loved this class; every Tuesday and Thursday I looked forward to the interaction with Dr. Freeman and the class.” And another student said: “I learned a great deal about the subject, but also about myself as well.” Finally, one student concluded in a way that apparently reflects the views of many students: “Dr. Freeman – he’s a cool guy; kind of reminded me of Robin Williams.”

What more can you say?