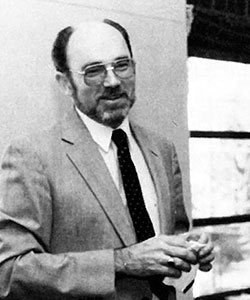 James Biehl joined the faculty at Ohio Wesleyan University in 1970. Before that, Prof. Biehl had worked as a carpenter, and then, after receiving his B.A. in philosophy from the University of Dayton, he taught fifth grade while working on his Master’s degree in English. He received his Ph.D. in Renaissance Literature from Southern Illinois University in 1974.

At Ohio Wesleyan Prof. Biehl quickly established himself as a fine teacher in the best liberal arts tradition, as his receiving the Shankland Award for the Encouragement of Teachers (1974) indicated. Ten years later he received the Bishop Herbert Welch Award for his outstanding teaching, becoming one of the few faculty members to garner both teaching awards. Students corroborate his colleagues’ judgment. They commend his cheerful temperament, unfailing courtesy, and wry sense of humor, and describe him as a spell-binding lecturer who evinces an infectious enthusiasm for art and the masterpieces of the Western literary canon.

Prof. Biehl has been dedicated throughout his career to the venerable concept of liberal education, centered in but not limited to the humanities, the Great Books tradition, and the broad sweep of English literature. His commitment to the liberal arts was recognized by Ohio Wesleyan’s Phi Beta Kappa chapter, which elected him to honorary membership in 1994. His liberal-arts perspective helped him bridge not only the two departments of which he was a member, Humanities-Classics and English, but also to cultivate links among those departments, history, art, religion, and modern languages to sustain the Program in Ancient Medieval and Renaissance Studies, of which he was a bulwark. His strong interdisciplinary interests are evidenced as well in the course on Paris and Florence (later focusing on Florence) that he taught for many years with a colleague from the history department.

For over three decades (from 1975 to this semester), Prof. Biehl has played a significant role in conceiving, designing, securing support for, and directing Ohio Wesleyan’s Honors Program. As director of the program, he recruited outstanding high school students, organized honors tutorials and courses, advised and taught numerous students in the program, and encouraged faculty to participate as mentors and teachers. The shape and success of the Honors Program derive in large measure from his dedicated leadership for thirty-one years.

In order to encourage and support teachers who sought to challenge the most talented high school students, Prof. Biehl established an Institute for Teaching Excellence, which he directed from 1985 to 2001. During that time he secured four grants from the National Endowment for the Humanities to offer summer programs for high school teachers (1986, 1990, 1992, 1994) in which prominent scholars and Ohio Wesleyan faculty provided a month-long, intensive intellectual experience at Ohio Wesleyan. One year the grant allowed the program to take a group of high school teachers to Florence, Italy. As part of the Institute’s work, he wrote teaching guides and manuals for Advanced Placement courses which continue to serve as invaluable resources for large numbers of high school teachers throughout the country.

Prof. Biehl’s concern to encourage outstanding teaching extended to his colleagues at Ohio Wesleyan. He was known as a devoted mentor to younger colleagues. Over lunch or in private discussions in his office, he helped them to adjust to OWU’s culture, encouraging pedagogical excellence and assisting junior faculty to develop into liberal arts educators.

With the Adam Poe Medal, Ohio Wesleyan University recognizes and celebrates the remarkable contributions of James W. Biehl to this academic community and to the liberal arts tradition more generally. His integrity, his sense of communal responsibility, and his exemplary teaching offer lasting inspiration to both his students and his colleagues.