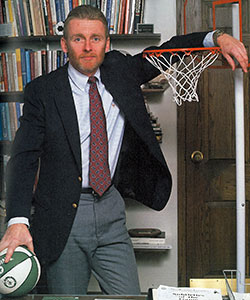 Ohio Wesleyan University men’s soccer coach Jay Martin was named the NCAA Division III Coach of the Year by the National Soccer Coaches Association of America, it was announced recently.

The national honor is the first for Martin, who has been named NSCAA/Met Life Regional Coach of the Year 8 times during his 15 seasons at Ohio Wesleyan.

“It’s a great honor,” said Martin, “but it’s truly a reflection of the program and the players over all these years.”

Ohio Wesleyan completed the regular season with a 19-1 mark, setting school records for regular season wins and winning percentage, and claimed the NCAC championship with a perfect 8-0 mark. The Bishops went on to win an unprecedented third consecutive Great Lakes Regional championship and went on to the NCAA Division III Final Four before losing 1-0 to eventual champion Cal-San Diego, winding up at 22-2.

Martin’s teams have compiled a 247-51-23 record in his 15 seasons. Ohio Wesleyan has competed in the NCAA Division III playoffs a record 14 consecutive seasons, winning 6 regional championships and advancing to the Division III Final Four 3 times. Martin has guided his teams to 8 conference championships and an unprecedented 9 Stu Parry Awards, the latter recognizing Ohio’s top Division III team each year.

Under Martin’s guidance, Ohio Wesleyan was the winningest men’s soccer team in the NCAA during the 1980s, compiling a winning percentage of .815 to top such programs as Indiana, North Carolina-Greensboro and UCLA. He has turned out 14 All-America and 55 All-Mideast players.