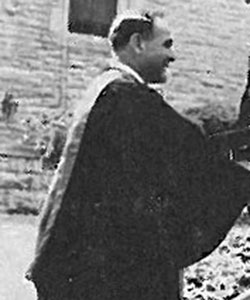 Prof. John Chase, ’49, of Ohio Wesleyan’s Zoology Department, holds the distinction of finding a rare tektite while exploring a cliff at Gay Head on Martha’s Vineyard, Mass. This tektite, which is only the third or fourth to have been discovered in this hemisphere, is described as “a fragment of an oddly sculptured glass disc,” bottle green in color, which apparently broke off from a circular disc that was probably about 3 inches in diameter. Accompanying Mr. Chase at the time of his discovery were Clifford A. Kaye, of the U.S. Geological Survey, and Dr. J. Gordon Ogden, III, Associate Professor of Botany and Bacteriology at Ohio Wesleyan. Mr. Kaye took the suspected tektite to Boston where its identification was confirmed by an expert at M.I.T.  The fragment is now on display in the Smithsonian Museum in Washington, D.C.

The origin of tektites, which are neither true gem stones nor related to rock, is undetermined, although scientists are now working under grants from the National Aeronautics and Space Administration to discover how tektites are formed. Dr. John A. O’Keefe, of the NASA, supports the theory that tektites come from the moon and claims that the strange substances may be formed during meteor showers. He compares their formation to the fall of Sputnik II which developed a comet tail approximately 60 miles long while disintegrating. Viewers reported seeing drops of molten-like material breaking off from the rocket and developing tails of their own before they vanished from view. Other scientists argue that tektites are splashes of sedimentary earth rock, melted and thrown into the sky when large meteorites hit the earth. A third group maintains that tektites are relics of comet-heads that have hit the earth.

The first report of a tektite discovery came from Czechoslovakia about 100 years ago, and before Prof. Chase’s find at Martha’s Vineyard the only other tektites found in the Western Hemisphere were in Texas in 1938 and in Georgia in 1956. Research workers believe that these rare substances may contain answers to many scientific questions if only more tektites can be found.

Dr. Chase will assume the new responsibilities on a part-time basis and will continue to devote a substantial portion of his time to teaching, according to OWU President Thomas Wenzlau. The appointment is for one year while the search for a new vice president for academic affairs continues. OWU’s former vice president for academic affairs, Dr. Robert Lisensky, this fall became president of Willamette University in Salem, Ore.

In his position as dean of the faculty, Dr. Chase will serve as liaison between the university faculty and administration. He will be primarily concerned with faculty personnel matters, such as evaluations for appointment, re-appointment, merit, promotion and tenure.

Dr. Chase has been on the OWU faculty since 1956. He is a 1949 graduate of Ohio Wesleyan and obtained the M.A. and Ph.­D. degrees from Harvard University.

Before joining the Ohio Wesleyan faculty, he was a laboratory instructor at Harvard, and was head of the science departments at Storm King school and Rye Country Day School in New York State.

He and his wife Norma have two sons—one an OWU graduate and the other currently a senior. They make their home at 117 Oak Hill Ave. in Delaware.