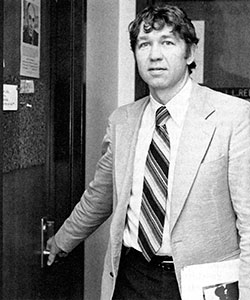 I am delighted to announce that the winner of the Bishop Herbert Welch Award for the Year 2010 is professor of English, Dr. Joseph Musser.

Dr. Musser received his B.A. from Union College and his masters and Ph.D. degrees in English from the University of Virginia. Joe’s research interests include 18th century British literature, rhetoric and the history of the novel. Joe is also an accomplished organist and composer. He composed two processionals that were used at the inauguration of Rock Jones.

Prior to coming to Ohio Wesleyan, Dr. Musser taught at the University of Kentucky. Since his arrival on the Ohio Wesleyan campus in 1977, Professor Musser has taught courses in English composition, introduction to literary study, writing poetry, and British literature.

Dr. Musser is one of the most dedicated and active members of the faculty, serving on many different faculty committees. He is Ohio Wesleyan’s Phi Beta Kappa Chapter president, a position he has held for the past 10 years.

In the words of his students and I quote…“Dr. Musser is amazing – I feel much more confidant in my writing after being ‘Musserized’.” Another student comments “he knows a lot and I have enjoyed plumbing the web-like depths of his mind. He’s my favorite teacher, he’s awesome.” Still another student describes her experience as “the most enjoyable and useful class in my experience at Ohio Wesleyan.”…Finally another former student contends “His class is like writing boot camp, Musser is da man.”

(Truly, little more can be said.)

Professor Musser has been recognized by both students and fellow colleagues as a truly superlative teacher – even by Ohio Wesleyan’s high standards – since his arrival on campus thirty-seven years ago. His teaching interests include English composition at the first-year, intermediate, and advanced levels; British literature of the period 1660-1800 (“the long eighteenth century”); the genre of the novel; rhetoric in fiction and poetry; and comedy and satire. He is especially well remembered among his students for the bracing demands of his intermediate-level writing courses, English 260 (Writing Essays) and English 263 (Style and Rhetoric). Particularly when it comes to writing instruction, he has always modeled a work ethic that has served as both a challenge and an inspiration to his students. In the words of one veteran colleague from the English Department, Professor Musser has always been “a master of the blackboard—at the end of class with Joe, you know where you’ve been.”

As a result, Professor Musser has received all three of the most prestigious teaching awards that are granted at Ohio Wesleyan: He was honored with the Sherwood Dodge Shankland Award for the Encouragement of Teachers in 1981; the Bishop Herbert Welch Meritorious Teaching Award in 2010; and in 1996, the Bishop Francis Emner Kearns Teacher of the Year Award for outstanding faculty scholarship, service, and leadership, both within the classroom and in the community, which exemplifies the historic mission of Ohio Wesleyan University to offer “a quality of scholarship, leadership, and service that enriches for Church and society.” He served from 1988 to 1992 as the Benjamin T. Spencer Professor of Literature and was appointed to the Helen Whitelaw Jackson University Professorship in 2004.

As a scholar of eighteenth-century British literature, Professor Musser has presented at many conferences and has published essays on Aphra Behn, Alexander Pope, William Cowper, Sir Joshua Reynolds, scientific theorist Thomas Kuhn, and the paradigm for nerve research in late eighteenth-century medicine. He has also been a distinguished composer of numerous musical compositions for the organ, other instruments, and choirs. He once built his own harpsichord. A remarkably talented organist, he wrote and played two processionals for organ, brass quintet, and tympani at the inauguration of OWU President Rock Jones in 2008.

Professor Musser’s record of devoted, disciplined service to Ohio Wesleyan University is exemplary. Over the years, he has been that rare faculty member who has at one time or another served on all – without exception – of the university’s most labor-intensive, high­ responsibility faculty committees: University Governance Committee, Faculty Personnel Committee, Academic Policy Committee, Executive Committee of the Faculty, Committee on Admission and Financial Aid, Faculty Reappointment Appeals Committee, and the Trustee-Faculty Liaison Committee. He also served on presidential search committees on three occasions – in the 1980s, in the 1990s, and in the 2000s. Moreover, he served as chair of the English Department – one of Ohio Wesleyan’s largest and most labor-intensive chairing assignments – for a remarkable twenty-four consecutive years, from 1983 to 2007. In addition, he has been president of Ohio Wesleyan’s Phi Beta Kappa chapter for more than twenty-five years.

Professor Musser has also served for ten years on the board of trustees at the prestigious Chautauqua Institution in Chautauqua, New York, where he has also played the organ and has sung in several choirs. He is married to OWU Professor Emerita Louise Musser, who chaired the Education Department and served as the OWU Associate Dean of Academic Affairs for thirteen years. He has two adult daughters and a new grandson. In retirement, Joe plans to write musical compositions, do lots of reading, and spend time with his family.