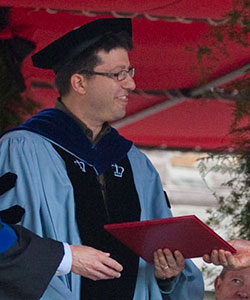 I am delighted to announce that the winner of the Welch Award for the Year 2012 is professor of history, Dr. Michael Flamm.

Dr. Flamm received his B.A. in History from Harvard and his Master’s and Ph.D. in history from Columbia University. Dr. Flamm is the author of five books and dozens of articles and presentations on his research in modern U.S. history. Michael was named a Fulbright Scholar and taught in Buenos Aires. At Ohio Wesleyan, Dr. Flamm teaches temporal surveys of American History since 1877. Last year while teaching a travel-learning course, Michael took his class to Vietnam to deepen his students’ insights and understanding of one of the longest and most harrowing wars in our history.

In the words of his students, and I quote: “Dr. Flamm has an uncanny ability to connect with the student in a professional manner. His enthusiasm makes it easy to focus and to learn; his courses are the most well-structured and well-taught classes I have taken at OWU.” Another student writes, “it is nice having fun while working hard in class. An incredible teacher, worth the price of tuition each year just to go to his class!”

(Truly, little more can be said.)

Dr. Michael Flamm Selected as Exemplary Teacher of the Year

Nominated by the Senior Class of 2006, Dr. Michael Flamm has been selected as the unanimous choice of the on-campus Religious Life Committee and the Board of Trustees’ Committee on Religious Life to be the 2006 recipient of The Bishop Francis Emner Kearns Award. This includes Dr. Flamm’s designation by the national United Methodist Church as the Exemplary Teacher of the Year from Ohio Wesleyan University and nomination for the national Outstanding Educator Award from the United Methodist Foundation.

Ohio Wesleyan University history professor Michael W. Flamm, Ph.D., has been awarded a prestigious Fulbright Scholarship and will teach two courses this fall at the University of San Andrés in Buenos Aires.

Flamm earned a lecturing award from the Fulbright Scholar Program, the largest U.S. international exchange program for students, scholars, and professionals worldwide. The program, sponsored by the U.S. Department of State, was established by Congress in 1946 to “enable the government of the United States to increase mutual understanding between the people of the United States and the people of other countries.”

At the University of San Andrés, Flamm will teach classes for both undergraduate and graduate students. Each class, he said, will “explore the causes, costs, and consequences, both intended and unintended, of America’s emergence as a global power” during the 20th century.

“When I taught in Buenos Aires in August 2006 as a Fulbright Senior Specialist, I found that there was a fair amount of hostility to U.S. policy, especially in Iraq,” Flamm said. “But I also found that there was a great deal of interest in U.S. history and how the forces of the past shaped the events of the present. … I am certain the same is true among the students that I plan to teach at San Andrés.”

Flamm joined the Ohio Wesleyan faculty in 1998 and received the Bishop Francis Emner Kearns Award as Exemplary Teacher of the Year in 2006. He also was named one of Ohio Wesleyan’s first-ever Sagan Fellows in fall 2009.

As a Sagan Fellow, Flamm created a new course, “The Vietnam Experience,” designed to immerse Ohio Wesleyan students in the history, culture, and politics of Vietnam, with an emphasis on the period from 1940-1975. To enhance their learning, the students will travel to Vietnam for 14 days in May.

Flamm is also the author or co-author of five books, including “Debating the Reagan Presidency” (2009), which examines the controversies and legacies surrounding Ronald Reagan’s foreign policies in Central America, the Middle East, and in relation to the Soviet Union. His other works include “Law and Order: Street Crime, Civil Unrest, and the Crisis of Liberalism” (2005) and “Debating the 1960s: Liberal, Conservative, and Radical Perspectives” (2007).