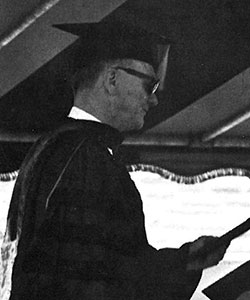 A professor emeritus of economics, he was considered one of Ohio Wesleyan University’s top 10 teachers in the last half of the 20th century. He also was widely known as an expert witness in state and federal court trials involving damage amounts sought by accident victims or their families. Professor Leonard was the sixth winner of OWU’s Welch Meritorious Teaching Award, established in 1963. He was born July 25, 1918 in Trappe, Md. to Norman and Ida Marshall Leonard. In 1939, he earned a B.A. from American University, where he was a star debater. Named a Yale Fellow, he received a master’s degree there in 1941. He earned a Yale doctorate in 1948 after serving as a junior economist with the Office of Price Administration in Washington in 1942 and serving four years as an Anny officer during World War II. He taught part-time for two years at Yale and one year full-time at Rutgers University before joining OWU’s faculty in 1948. Before his 1981 retirement, he was the only Ohioan on the 40-member Associated Economic and Statistical Consultants. He was a past president of the American Society of Econometric Appraisers and a member of Corporate Finance Associates. He participated in a seminar in Yugoslavia sponsored by the Great Lakes Colleges Association and Ljubljana University in 1966. He was co-writer of the 1978 book, Forensic Economics: Valuation of Business and Business Losses and co-author of four textbooks. He wrote articles for several professional journals. Professor Leonard was a member of Asbury United Methodist Church and served on the Londontown Apartments and American Civil Liberties Union boards. His body was donated to Ohio State University’s School of Medicine as he had directed.

He is survived by one daughter and son-in-law, Katie and Hank Borst of Elk Creek, Mo.; one son and daughter-in-law, Lloyd Leonard and Elizabeth Wiener of Washington, D.C., one grandson, Max Haddaway Leonard of Washington, D.C.; a brother, James Marshall Leonard of Albany, N.Y.; three sisters, Katherine Leonard of Easton, Md., Norma Leonard of Baltimore, Md., and Clara Glass of Richmond, Va.

A memorial service will be held at 11a.m. Saturday in Asbury Church, with the Rev. Philip Wilden officiating.