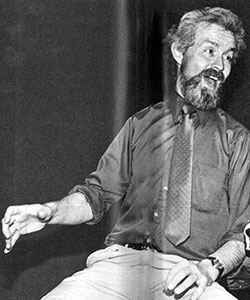 I am delighted to announce that the winner of the Welch Award for the Year 2002 is professor of music, Mr. Robert D. Nims.

We know, of course, that Bob received an excellent and well-rounded undergraduate education because he graduated from Ohio Wesleyan University thirty-nine years ago, in 1963. He then went on to earn a master of music degree in pipe organ performance at the Yale School of Music in 1965, then served as a music instructor for three years at Colby-Sawyer College in New Hampshire, and eventually earned a second master of music degree in vocal performance at Boston University. Bob first assumed his post at Ohio Wesleyan in September 1971.

During his three decades at Ohio Wesleyan, Bob has compiled a literal catalogue of professional performances as a singer. He has been a baritone soloist with a long list of symphony orchestras and with various college and community orchestras and choral organizations; and he has performed as a professional choral singer with Robert Shaw in France in 1994 and at Carnegie Hall in 1995, 1996, and 1997. He is a member of a number of professional organizations including the America Choral Directors Association and the National Association of Teachers of Singing, serving as president of its Ohio Chapter.

As our preeminent teacher of voice, and, in fact, during most of his career, Ohio Wesleyan’s only full-time voice teacher, professor Nims has been involved in nearly all things vocal undertaken at the University. He teaches private voice, choral conducting and choral techniques, directs the choral program, and serves as musical director of the University opera theater program.

Professor Nims is, according to his students and in their words: “knowledgeable,” “informative” “stimulating,” “encouraging,” “enthusiastic,” “enjoyable,” “demanding,” “fair,” “helpful,” “patient,” and “understanding.” Said one student: “He is very positive and always lets you know when you are doing something well;” said another: “He has a fine ear for locating areas of vocal difficulty and progress;” and another: “I’ve never grown so much before in my life, and Mr. Nims made that possible.”

Indeed, over and over again, students comment on the progress they have made working with Bob. “Mr. Nims has been an extremely helpful and knowledgeable instructor to work with; I have appreciated his sense of humor and expertise throughout the course,” said one. Another reported: “More and more, music is making sense on an emotional level; when I think of where I started and where I am now, I’m amazed at what and how Mr. Nims has taught me.” Yet another student concluded: “All I can say is that before this semester I couldn’t conduct a fire drill – now I feel I can nearly conduct a choir; I’m starting to figure out how to communicate music and Mr. Nims is the reason why.”

Finally, in a recent course evaluation, a student gave him some advice (and I’m not sure whether George W. should be concerned or not); the student wrote: “Mr. Nims should run for president!”