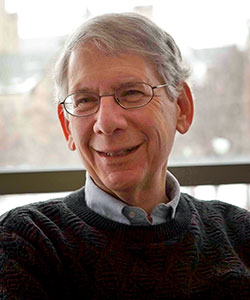 I am delighted to announce that the winner of the Welch Award for 1999 is professor of economics, Dr. Robert Gitter.

Bob regularly teaches courses in Labor Economics, Public Finance, and Econometrics. He has published dozens of articles on worker training, unemployment, forensic issues, public finance, and economic education. He has received numerous grants to support his work from the U.S. Department of Labor. He has served as a Visiting Scholar at Ohio State’s Department of Management and Human Resource, and as Visiting Senior Research Associate at Ohio State’s Center for Human Resource Research. Bob has also served regularly as a consultant on economic and educational issues, and as an expert witness on lost earnings and statistical discrimination.

At Ohio Wesleyan, Bob has served on nearly every faculty committee and has chaired both the Academic Policy Committee and the Committee on Admission and Financial Aid. He has also served as President of the Ohio Wesleyan Chapter of the American Association of University Professors. He is currently the Chair of the Economics Department, a position he has also held on two prior occasions, for a total of seven years.

Dr. Gitter is, according to his students, and in their own words: “enthusiastic,” “energetic,” “engaging” and “entertaining.” He is also “challenging” and “demanding” but also “clear” and “concise.” As one student put it, “He loves what he teaches and gets his students to love economics too.” Said another: “Dr. Gitter makes economics more than just concepts; he applies them to real situations.” And another: “Even though economics is not my favorite subject, Dr. Gitter kept me attentive with his comedy and wit.”

Appreciation for Bob’s sense of humor permeates his course evaluations. One student observed: “Dr. Gitter made it impossible for the student to fade out, switch off, or fall asleep by his unique and entertaining as well as informative style of teaching.” Another said: “There is never a dull moment in his class.” Another said: “He has a great sense of humor; he likes the Simpsons, I like the Simpsons, so he has an unwritten bond with me.” Others said: “He has great jokes;” “He has dumb jokes;” “He’s a pretty cool prof;” “He’s a smooth dude.”

But, in the end, it is Bob’s insistence on quality teaching, rigorous learning, and easy approachability that students appreciate most. As one student said: “I do appreciate, in an odd and puzzling way, his very difficult exams and high standards.” And perhaps most telling of all, one student spoke for many in saying: “It is very nice to know that he cares about us.” One student summed it up in a single word: “Bravo!”

So…, Bob, I reiterate: Bravo and Congratulations!