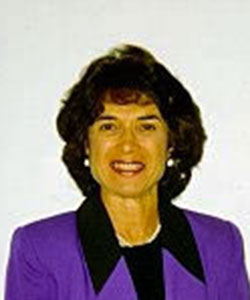 I am delighted to announce that the winner of the Welch Award for the Year 2000 is professor of modern foreign languages, Dr. Sandra Harper.

Dr. Harper received her bachelor’s and master’s degrees and her Ph.D. from The Ohio State University.

She came to Ohio Wesleyan as an instructor in Spanish thirty-two years ago in 1968, became a full professor in 1986, and has served as chairperson of the Department of Modern Foreign Languages on several occasions, most recently for a period of eight years between 1986 and 1994.

Dr. Harper’s research interests include contemporary Spanish theater, film, and short story, the relationship between film and literature, and the role of women writers and the image of women in contemporary theater, film, and short story. She is the author of numerous articles and reviews, and since 1993, she has been either the sole author or major contributor to four books. Since 1998, Sandra has served as editor of Estreno, a quite prestigious scholarly journal devoted to contemporary Spanish theater.

Dr. Harper, in addition to teaching Beginning and Intermediate Spanish courses, regularly teaches courses in Directions in Spanish Film and Literature, Masterpieces of Hispanic Literature, Contemporary Spanish Drama, and Spain in the Twentieth Century. She has also, of course, served the campus community tirelessly, especially with her work on the Teaching and Learning Committee, the Cross-Cultural Committee, the Intercollegiate Athletics Committee, and the Faculty Executive Committee. And, she is serving currently as the director of Ohio Wesleyan’s Study Abroad Program in Salamanca.

Dr. Harper is, according to her students, and in their words: “enthusiastic,” “upbeat,” “exciting,” “thorough,” “challenging,” “highly organized,” “efficient,” “highly professional,” “patient,” “flexible,” “helpful,” “interesting,” and “fun.” Said one student: “She presents complex issues and themes in a clear and understandable fashion.” Others added: “She is willing to help with any problems;” “she has a great link with students;” “she’s soft-spoken but always in control;” “she treats students with respect;” “she’s an excellent professor — all the way around.”

Perhaps the most notable theme that comes up time and time again in student comments is the conclusion that Dr. Harper encourages conversation in a challenging setting. As one student put it: “She corrects us when we are wrong but truly encourages participation; she is so easy-going and makes something as difficult as speaking Spanish in front of the class simple and comfortable.” Said another: “Dr. Harper encourages conversation, she’s easy to approach, and makes it easy to feel comfortable contributing to class.” And another: “She encourages students to participate and helped a lot with my confidence in speaking the language.”

One student said it all: “I have had Dr. Harper for three very different courses, and she has totally changed my attitude about Spanish. When I came to Ohio Wesleyan, I hated studying foreign languages; now I love Spanish and I’m excited to learn all I can about it. As a direct result of Dr. Harper’s classes, my love of language has grown immensely and I hope to continue studying Spanish as long as I can.”

What more can be said? Sandra, congratulations!