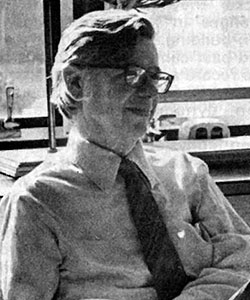 William D. Stull, highly-esteemed Professor of Zoology at Ohio Wesleyan, was born on July 3, 1912, in Madison, New Jersey. Long-time family friend, Edwin Drew, Professor of Systematic Theology at Drew Theological Seminary, described the Stull family as “remarkable in respect of both character and mental power”, and “noted for their integrity”.  Bill would live up to that family reputation.

After graduating from Madison High School, Bill entered Middlebury College, where he majored in biology and received his B.S. in 1934; he remained at Middlebury for an additional two years while completing requirements for the M.S.  Then he pursued graduate studies at the University of Maryland.  His doctoral research focused on physiological differences in the blood of amphibians at high and low temperatures, and he was awarded the Ph.D. in 1940.

Dr. Stull then embarked on a long and distinguished career as a professor. His initial appointment came at Central Methodist College (now University) in Fayette, Missouri, in the Department of Biology and Geology.  During the summers of 1940-41, he also taught biology at Radford College in Virginia. In his five years at Central Methodist, he rose rapidly through the ranks – from Instructor to Associate Professor – and he became thoroughly involved in the life of the community. His department chair described Bill as a “big chap with a frank open countenance and a fine appealing smile”, and a man who had “high ethical standards and abhors sham”. It was there that he met Betty, a faculty member in the music department, who was to become his wife, lifelong friend, and companion.

However, those were the War years, and Central Methodist College fell upon such hard financial times that it was forced to cut positions.  Stull’s colleagues lamented the need “...to reduce its teaching staff to the very minimum, and so lose this valuable member of the Department of Biology”. At that point, Bill’s former graduate mentors discussed bringing him back to Maryland as a regular faculty member. They wrote that he was “one of the finest boys we have ever turned out”, and a “recognized leader in our graduate group”. Only because of Maryland’s policy against academic ‘inbreeding’ did they not pursue him. Central Methodist’s loss and Maryland’s loss became Ohio Wesleyan’s gain.

Dr. Stull came to OWU as an Associate Professor of Zoology in 1945, and was promoted to Professor in 1951.  During his tenure at OWU, he taught a wide variety of courses including General Zoology, Comparative Vertebrate Anatomy, Vertebrate Ecology, Genetics and Evolution, Ornithology, and Human Physiology. He had an extremely broad range of knowledge – from ion movements in kidney cells to bird migration to a naturalist’s masterful understanding of fresh water stream communities. He was also a skilled carpenter and electrician, one who built his own equipment for both laboratories and independent studies. His research topics included fisheries, salamander breeding behavior, the life history of the Chipping Sparrow, and the effect of habitat burning practices on songbird populations. He was a Fellow of the Ohio Academy of Science, and a member of the American Society of Zoologists, American Institute of Biological Scientists, Wilson Ornithological Society, and Sigma Xi, the Scientific Research Society. Throughout his career, Bill continued to develop new interests, and generations of students were drawn in by his enthusiasm for learning. For example, while on leave in 1973, he and Betty visited the Galapagos Islands under Spartan conditions – they sailed on the Calicuchima, a crudely converted WWII era minesweeper; however, Dr. Stull realized that giving students an opportunity to experience the places and organisms that Darwin saw might well change their lives.  He returned and developed the forerunner of our Island Biology course, and took the first group of students to the islands in the winter of 1974. The travel agent who helped with the arrangements and accompanied the group was so impressed that she wrote the President of Ohio Wesleyan, saying:  “Professor Stull… is one of the finest educators I have ever met.  He held the respect, love, and admiration of each one of his students...”.

Another of Dr. Stull’s hallmarks was his love of field biology.  In addition to his trips to the Galapagos, he spent summers at Cornell University, the Cold Spring Harbor Biological Laboratory, the Franz Theodore Stone Laboratory of Ohio State University on Lake Erie, the Lake Itasca Forestry and Biological Station, and the Desert Biology Institute of Arizona State University. He was dedicated to environmental causes, and he taught about the importance of wild things and wild places long before it reached the popular consciousness.

Bill also used his knowledge and experience to help students, as well as other biology teachers, at other institutions: he taught courses at Ohio State’s Stone Laboratory for several summers, organized institutes for high school science teachers both at the University of Minnesota and at OWU, and was a consultant at a summer institute for college biology teachers in Jodhpur, India.

Bob Lisensky, former Vice President for Academic Affairs, praised him for initiating “exciting conversation on curricular innovation”, and gave him credit for “making the department one of the strongest at the university, in no small part because of the working environment Bill established.” “Stull”, he said, “provided gentle but needed encouragement to Vice Presidents, students, and colleagues alike”.  All of these contributions were recognized and celebrated when he received the Bishop Herbert Welch Meritorious Teaching Award at commencement in 1973.

Bill Stull retired in 1977. Prior to retirement however, he applied his skill as a gifted field observer of birds to the art of woodcarving, and in subsequent years, he won numerous awards for the extraordinary attention to detail and astonishing lifelike qualities of his carvings. Many of his friends and colleagues are proud to have “a Bill Stull bird” to grace their homes. He spent his final years in Fort Myers, Florida where he died on May 11, 2007. He had lost most of his eyesight, but his dignity and the “frank open countenance and fine appealing smile” never faltered.

The William D. Stull Award, for a student who performs curatorial duties in the OWU Zoology Museum, was established in 1977 by colleagues, students, and friends to honor his contributions to this college and to his discipline. He remains an inspiration to his many former students and to those fortunate enough to have been his faculty colleagues.