June 16, 2019. Exploring the medieval Welsh town and Chepstow Castle, and walking to the beginning of Offa's Dyke Path in Sedbury, England. 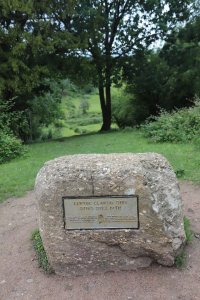 I arrived in Chepstow from Bristol around 1:30, having learned that the rest of the team was still delayed at airports in the U.S. and wouldn’t be arriving until tomorrow. I walked from the train station to the First Hurdle Inn and tried to make the most of the day.

It’s a lovely medieval and Renaissance town of two-story homes. A large road splits off the more modern southern half, with its Tesco supermarket. The old town, or town center, sits at the top of a small hill, and you can still see the ancient wall that once surrounded the city.

I explored Chepstow Castle for about 90 minutes in the afternoon. I was in awe standing in the middle of the central section, built some 950 years ago by William the Conqueror. The floors were gone now, of course, but there’s enough preserved in the staircases, towers, fireplaces, small rooms, windows, arches, and decorative sculpture to imagine what it would be like living there in 1200 or 1300. It was fascinating touching the walls and feeling the history.

After the castle, I crossed the bridge into England and walked to the beginning of Offa’s Dyke Path, about a mile and a half. It’s well marked and was a pleasant walk. I didn’t need my jacket and even had some sunshine. Sedbury, where the path begins, felt suburban, with a few luxurious homes along the Wye in the north, and smaller homes, more working class, but still suburban, as I walked south. The stone marker at the beginning of the path is up at the top of a hill, with a nice view overlooking the Severn and the suspension bridge to the south. The hill was just past a field with a sign warning that a bull was in the field. I didn’t see him.

I met a couple from London at the bottom of that hill, on a small, wooden footbridge – Tony and Tiff. They’re starting the walk, as well, doing the small Sedbury bit before starting from Chepstow tomorrow. We shared notes on other walks we’ve done. They’ve walked the Cleveland Way and Coast-to-Coast walks and loved both – said the Cleveland walk included a lot of coastal walking over rocky trails. I told them about the West Mendip walk that I had just completed two days earlier. Surprisingly, Tony said he’s been to Columbus, having done business with Lucent.

These walking trails really do promote friendly bonding among the walkers – from the U.K., the town, and around the world. I even walked about 100 meters with the dog of a local man walking ahead of me.

Part of the city walls in Chepstow, with the Welsh flag flying in the back.

Part of the city walls in Chepstow, with the Welsh flag flying in the back.

View of Chepstow from the castle.

View of Chepstow from the castle.

Chepstow Castle and the River Wye.

Chepstow Castle and the River Wye.

The beginning of Offa's Dyke Path.

The beginning of Offa's Dyke Path.

Chepstow Castle from across the Wye.

Chepstow Castle from across the Wye.

View of the Severn Estuary at the beginning of Offa's Dyke Path.

View of the Severn Estuary at the beginning of Offa's Dyke Path.