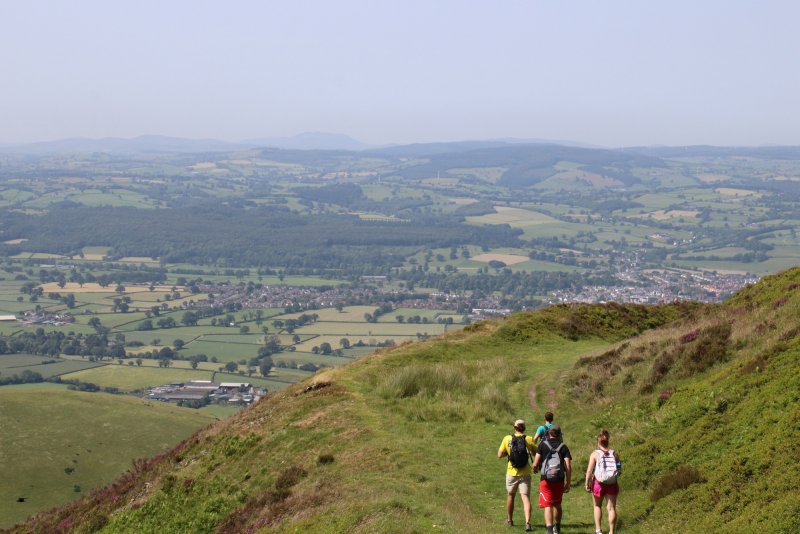 Today held a lot of uphill climbing with some rough, long downhills. I was pretty unmotivated to hike, so I was extremely frustrated every time I got to the false summit of each hill and saw that there was more climbing to do. The hills weren’t super steep or anything, there were just so many of them, and the gradual climbing made the uphill walking feel so long.

There was one hill that really stood out to me for many different reasons. I think it was called Moel Famau. The Jubilee Tower was at the top, and it just seemed so far away. The hill was in a park area where lots of young folks and people with dogs walk a lot, and it was super annoying and discouraging when a little dog and its spritly owner would trot past me while I felt like I was halfway to an asthma attack from all the walking. This frustration was actually a blessing in disguise because it taught me a serious lesson in both perspective and grace. I kept thinking of how hard the hill was for me but how easy it seemed for these dog walkers, and then I realized that it probably would have been easy for me to walk up it too if I hadn’t been constantly walking for almost two weeks leading up to it. I realized there was no reason for me to be discouraged at how easy it was for other people because I we were just in different situations. There was a huge group of young school children at the top of the hill looking at the monument, and I could see them in their matching red shirts from the bottom of the hill. For most of the walk up there I was so bitter at these kids for how easy it was for them to get up there; when I got almost to the top, they started walking back down and I was uncharacteristically annoyed when a few of them bumped into me… here came the lesson in grace when I realized that it’s just not a big deal, and I should just be happy that they were there having fun and I was on this extremely cool adventure of a lifetime.

Anyways… the view from the top was amazing! While standing in the Jubilee Tower, you can see the Irish Sea, the ending point of Offa’s Dyke Path, in the distance! It was finally in sight! You can also see Liverpool if you look right and some Welsh villages if you look left, and it was pretty cool to feel like I was standing right on the border between two countries.

At dinner at the Dinorben Arms fancy pub, Peyton led a discussion on Areas of Natural Beauty in the U.K., and I was fascinated because I’d never even heard of those before. They’re kind of like U.S. National Parks, but more easily accessed. We’d walked through a bunch of them and I didn’t even know! Kyle then led a talk on slate mining in Wales; I was blown away when he said that Wales was such a large world exporter of slate. I never would have thought that such a small little place could hold so many mines. Pretty neat!

Long climbs through the Clwydian Range.

Long climbs through the Clwydian Range.

It was a beautiful, sunny day, with several walkers going to and from Jubilee Tower.

It was a beautiful, sunny day, with several walkers going to and from Jubilee Tower.

The hike up Moel Famau to Jubilee Tower.

The hike up Moel Famau to Jubilee Tower.

A day in the Clwydian Range.

A day in the Clwydian Range.