Ohio Wesleyan University has a long history of welcoming students from Pakistan, providing a friendly and safe environment, and helping prepare them for success and fulfillment in the world.

The Ohio Wesleyan campus includes students from around the world, including some 25 from Pakistan. They continue a long tradition of outstanding students from South Asia who have been welcomed to Ohio Wesleyan with open arms. In fact, one of the most recent OWU student-government presidents was from Pakistan. Karachi native and 2015 OWU graduate Ibrahim Saeed says, "I have never felt so welcomed in my life." 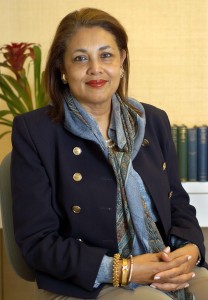 Our noteworthy alumni include 1961 graduate Dr. Shirin R. Tahir-Kheli. She came to OWU from Pakistan and has built a distinguished career in international relations, serving under three U.S. presidents. She became America's Muslim Ambassador in 1990 and has served as the U.S. Secretary of State's Senior Advisor for Women’s Empowerment and Senior Advisor on United Nations Reform. In 2011, Newsweek named her one of the "150 Women Who Shake the World."

Commitment from the Top

OWU President Rock Jones says: "In this global society, the free flow of students and scholars enhances democracy in this country and around the world. International students attending U.S. institutions and interacting daily in this culture gain a true understanding and appreciation of our democracy and our values. When they take that understanding home, we build a more peaceful world."

Students from Pakistan study in almost every field at Ohio Wesleyan and enjoy a vibrant campus life, participating in sports, social life, and campus activities.

And they take advantage of great opportunities offered by The OWU Connection, including research with faculty, internships, and global travel.

In a summer research project, Khayyam Zubair worked with Prof. Sean McCulloch to build a computer program to play the game Modern Art, which is based on auctions. He used probability-based mathematics to form in-game strategies for the program.

Drawn to The OWU Connection

Iman Ashraf ’20 came from Pakistan and U.A.E. to study business and psychology. Iman will be studying abroad in Cork, Ireland, next year as part of The OWU Connection.

Shaaref Shah ’17, a double major in economics and psychology from Karachi, interned with Bank of America in New York City. As a Summer Analyst, he worked on managing risk for the Readiness, Deployment, Operations, and Implementation teams. He is now in graduate school at the University of Pennsylvania.

Ohio Wesleyan alumni from Pakistan are enjoying careers in business, science, the arts, and other fields. Some return to Pakistan, some remain to work in the United States, and others travel across the world.

Ibrahim Saeed, from Karachi, graduated in 2015, majoring in computer science and economics. Now, he lives in New York City and works as a technology analyst with JP Morgan Chase.

Saba Fatima came to OWU from Pakistan and graduated with a degree in philosophy in 2002. She earned a Ph.D. from State University of New York in Binghamton and is now an assistant professor of philosophy at Southern Illinois University. She says, “I loved my time at OWU and value all the experiences it offered me. I was part of a very close-knit group of international students, all from very diverse backgrounds.”

Originally from Lahore, Salman Toor graduated from OWU in 2006 with a degree in fine arts. Today, he lives in Brooklyn, creating art that explores the ambiguities of living in the East and West. His art has been exhibited in solo shows in New York.

Day on the Jay