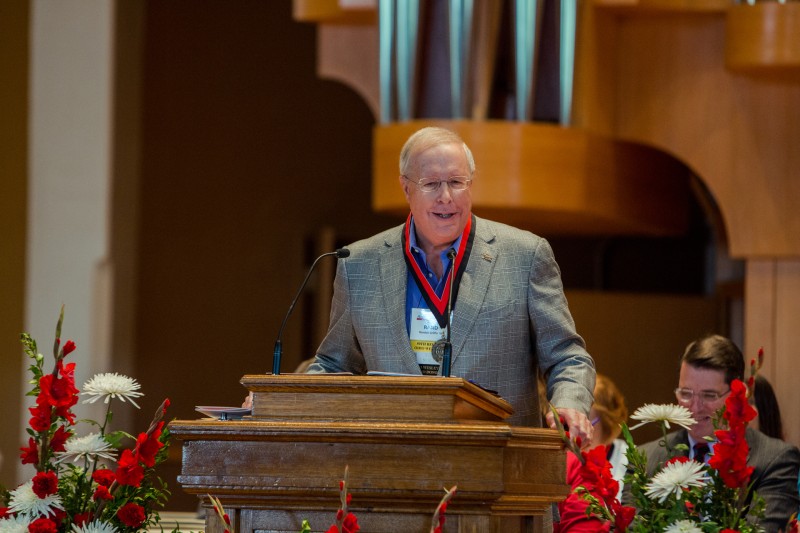 With this presentation of Ohio Wesleyan University’s Distinguished Achievement Citation, the Ohio Wesleyan Alumni Association Board of Directors is honored to recognize Randall Griffin for his outstanding commitment to the University and for his successful professional career.

Rand graduated from Ohio Wesleyan University in 1966, majoring in Economics and English. At OWU, he was a member of the Varsity Swimming Team and the Wesleyan Council on Student Affairs. He also was a member of the Ohio Delta chapter of Sigma Alpha Epsilon Fraternity and served on the Interfraternity Council.

After graduating from Ohio Wesleyan, Rand continued his studies at Harvard Business School, where he earned his Master of Business Administration degree.

Before his retirement, Rand served as President and CEO of Corporate Office Properties Trust, becoming a Trustee after he retired. He also has held many high-level executive management positions for companies ranging from the Midwest-based Linclay Corporation to EuroDisney Development in Paris.

In 2011, Rand earned the Business Leader of the Year Award from Loyola’s Sellinger School of Business and Management. During his career, he directed the development of more than $3.8 billion in real estate assets.

Rand also served as a First Lieutenant in the U.S. Army, completing a tour of duty in Vietnam as an advisor to the Special Forces Vietnamese Unit.

Rand has had an incredible philanthropic career on top of his business accolades. He has served on the Board of Directors for the The National Aquarium, The Center for Aquatic Life and Conservation, and the Maryland Business Roundtable for Education. He also is on the Board of Trustees, Governors, and Visitors for three more Maryland and Washington, D.C.-based communities. His longterm and generous involvement with Ohio Wesleyan has included being a member of the President’s Circle and the Tower Society.

It is with great admiration and appreciation that we award Randall Griffin the Distinguished Achievement Citation for his dedication to career and philanthropy.