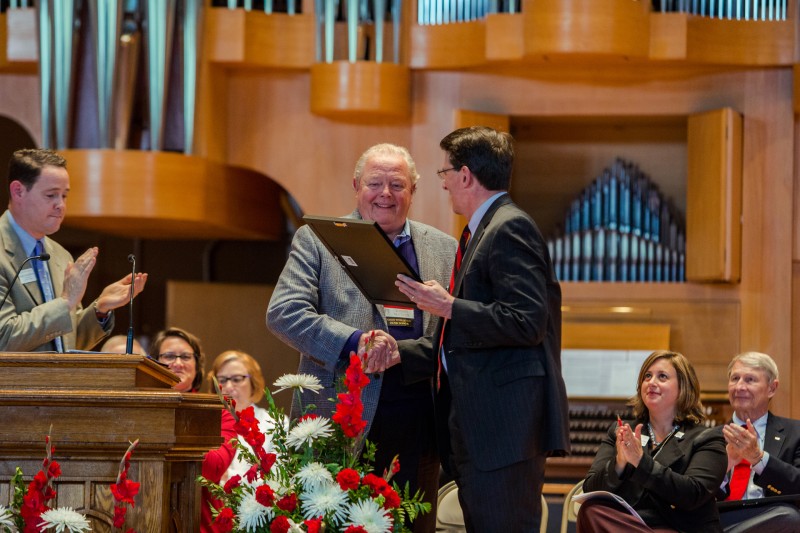 With this presentation of Ohio Wesleyan University’s Alumni Award, the Ohio Wesleyan Alumni Association Board of Directors is proud to recognize Robert W. Gillespie for his outstanding service and dedication to his alma mater.

Bob earned his B.A. in Economics in 1966. He was President of the Epsilon chapter of the Alpha Sigma Phi Fraternity and was involved with Le Bijou Yearbook and The Transcript student newspaper.

He has maintained close connections to Ohio Wesleyan since his graduation. Bob served as a Trustee-at-Large from 1987 to 2013, when he became a Life Trustee. He currently serves on the Board of Trustees’ University Advancement, Finance and Operations, and Investments committees.

Bob also has been active with the Department of Economics and with The Woltemade Center for Economics, Business and Entrepreneurship. He previously served as Chair of The Campaign for Ohio Wesleyan and has been a dedicated volunteer with Annual Giving, his Class Reunion, and more. Professionally, Bob is Chairman Emeritus of KeyCorp in Cleveland.

In 1997, Bob was inducted into the Hall of Excellence of the Ohio Foundation of Independent Colleges.

Today, during his Golden Reunion, we thank, and applaud Robert W. Gillespie for his longstanding and dedicated service to Ohio Wesleyan and the campus community.