A Circle of Friendship Through the Decades 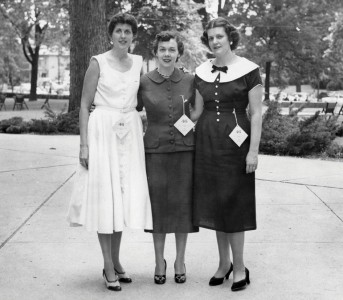 These OWU ’46 classmates—shown here at their 1956 10-year reunion—shared a lifelong friendship that began as their freshman year unfolded in 1942. Phyllis White O’Reilly ’46 (left) and Joanne Lawrence Root ’46 (center) grew up in New London, OH, and then proceeded to campus together; Virginia “Ginny” Bagley Heischman ’46 quickly became an integral part of the trio. They were inseparable for four years and often reminisced about their OWU days in the years to come.

Pleased and proud that their OWU connection had stood the test of time for nearly 75 years, Joanne planned to attend the 70th class reunion in May, but she fell ill in mid-April. The circle of friendship remained unbroken until May 22, when at, age 91, Joanne passed away peacefully in Norwalk, OH, with her best friends Phyllis and Ginny in constant touch with her until the end. Ginny, a widow, lives in Westerville, OH, and Phyllis, also a widow, lives in Austin, TX, near her family. Joanne is survived by her husband of 67 years, Thomas Root, son and daughter-in-law Thomas Root ’74 and Kathy Geer Root ’75, daughter Susan Root Moore and sons Steven and W. Todd Root.