Restoring The “Rolls Royce of Bicycles” 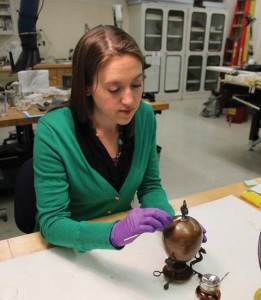 Diana Johnson Galante ’03 is an objects conservator at the National Museum of American History in Washington, D.C., which means she’s an expert at studying, preserving, and restoring three-dimensional art and artifacts. Her recent work has included the restoration of a 1896 women’s safety bicycle.

Diana spent more than 200 hours cleaning and restoring the Columbia bicycle, which went on display in the museum’s Taylor Foundation Object Project.

Diana knew that the bicycle would be an exciting restoration project, though it would require significant work. Donated to the museum in 1950 by the son of its original owner, Mary Noble Wiley of Montgomery, AL, the bicycle stands out for it its intricate ornamentation, added by Tiffany & Co.

Diana began by documenting what she knew about the bicycle and photographing it. She could tell right away that the bike had once had an impressive look to it.

“It was clear to me that this object was supposed to be bright and shiny—I mean, it was so elaborately embellished by Tiffany. It was like the Rolls Royce of bicycles, meant to distinguish its owner from all the other women on their run-of-the-mill bicycles,” she told the museum blog. 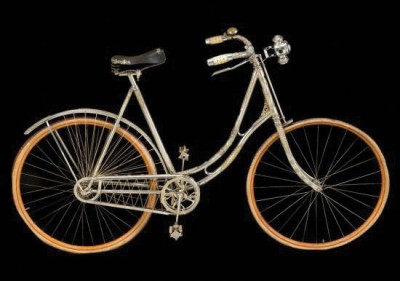 “There are different motifs at different locations on the bicycle. There are rosettes and other organic Art Nouveau-inspired motifs repeated throughout the frame, and then the handlebars have a very different motif—dogwood flowers with leaves.”

For Diana, the bike’s intricacies tell a story that she hopes museum visitors will connect with, even if it takes a bit of imagination.

“Something that I love about historical objects in this museum is that you can think about actual people using them. You just have to think, she rode this, probably wearing a full skirt and fancy hat. She was stylin’.”