Meggie Feran Sexton ’06 has struggled with disordered eating (including anorexia, bulimia, and over-exercising) for almost a decade. Now, she is in full recovery and is dedicated to destigmatizing eating disorders and raising awareness.

Sexton began struggling with disordered eating her senior year at Ohio Wesleyan, and this developed into full-blown anorexia while attending graduate school. She says through treatment, she has learned that there are many others who struggle with eating disorders.

“Now that I’m in active recovery,” she says, “I want to share my experiences and help erase the stigma that eating disorders are self-centered or that they only affect Caucasian, adolescent females.” She believes raising awareness about eating disorders in older women and pregnant women is particularly important because these groups are less talked about.

In 2013, Tate Publishing published Sexton’s memoir To the Moon and Back—A Daughter/Mother Journey Toward Eating Disorder Recovery. She hopes the book will help others in similar situations realize they are not alone. She wants them to know that “eating disorders are serious illnesses rooted in low self-esteem, perfectionism, even having a strong genetic component, but they can be untangled and undone.It’s okay to be human and to be imperfect.”

A journalism and psychology double major at OWU, Sexton this year received the Ohio Wesleyan Young Alumni Award. The award honors alumni who have graduated in the past 15 years and have demonstrated significant or ongoing commitment to extraordinary professional work, research, volunteerism, or service to the University.

“To be able to receive the [award] is truly due to the support that I’ve had along the way, which is rooted in my OWU family.” She identifies this family as her cross-country and track teammates, professors, advisors, and Kappa Alpha Theta sisters. 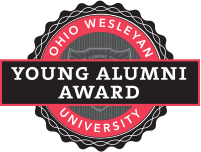 Sexton worked at OWU for three years as Assistant Director of Young Alumni and Student Engagement, where she encouraged young alumni to form volunteer committees and give back to the OWU community. She also helped with senior programming and connected graduating students with young alumni for networking and job searching purposes.

Sexton currently works full-time as a health systems manager for the American Cancer Society. She says it is both motivating and rewarding “to be a part of something much bigger than myself.”