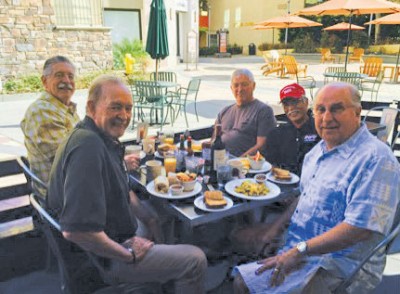 John Teets, now living in Maine, has taken 12 annual transcontinental trips in his SUV to visit his five children and 13 grandchildren who reside in the East, as well as one of his sons and family, who live in Palos Verdes. California transplants, “Sandy” (Venice, CA), Steve (Oak Banks, CA), George (Palos Verdes Estates, CA), and Pete (Arroyo Grande, CA) had the opportunity to reunite with John, as some of them hadn’t seen John in more than 50 years. They shared memories about OWU, including classes, professors, friendships, classmates, and athletics. The years spent living together at the SAE house in the early and mid-1960s, with sage advice from Chapter Advisors William F. Bigelow, John Reed, and Coach Fred Myers, ensured that they would always represent Ohio Delta Chapter of SAE as “True Gentlemen.” Having copies of the OWU yearbooks from 1962–1966 on hand helped the friends walk down memory lane.

As John plans to make his annual trek to Southern California in 2017, the brothers of SAE plan to gather again at the “same time and the same place.” Go Bishops and Phi Alpha!