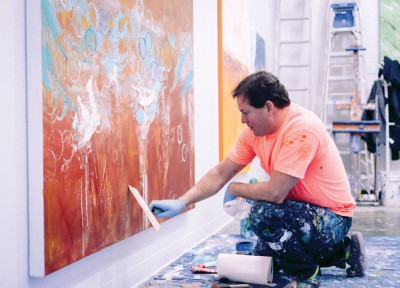 William Day ’93, a Boulder-based artist, recently partnered with the OneWall community art initiative in Denver to create an art installation on a 50-foot brick wall in downtown Denver. The three-panel installation was commissioned by Absolut Elyx luxury vodka company—but the installation wasn’t intended to simply sell spirits. Instead, Will was tasked with representing Absolut Elyx’s recent partnership with Water for People, an international nonprofit organization that works to bring safe water and sanitation to those in need.

“The real challenge was finding a relationship between the two colors because you really don’t see them together he says. It was about giving back and coming together.”

Will says the scale of the project inspired him. “It challenged me to express how we work together with colors and a message that will impact people…The message isn’t about Will, but about all of us collaborating on a global vision that is sustainable, has integrity, and is making an impact; one that will change people’s lives.”