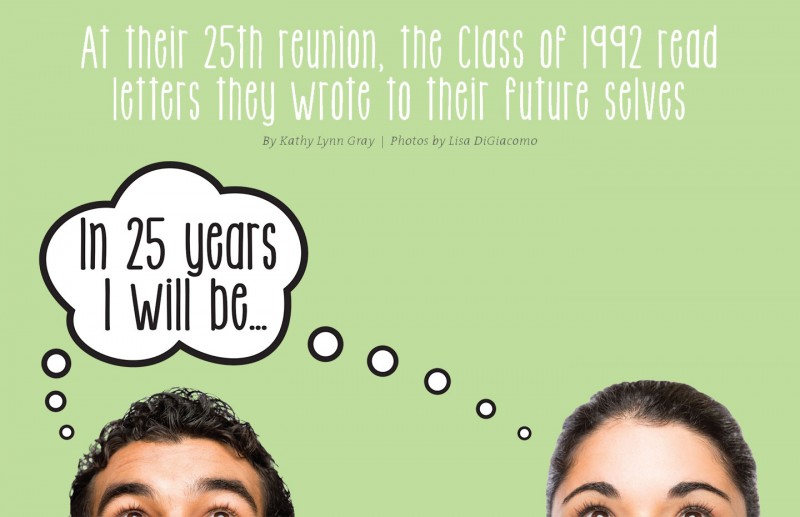 What would it be like to hear from your 22-year-old self 25 years later?

Members of the Ohio Wesleyan Class of 1992 got a chance to find out at their 25th reunion dinner in May, when they opened letters some had written to themselves just before graduating. The 151 letters traveled the country for 25 years in the care of Elizabeth R. Dellamora, who took it upon herself to preserve her classmates’ hopes and messages. Alumni received the letters as they checked in at the Schimmel/Conrades Science Center for the dinner, and the authors read their words in their own time.

“I’m super excited to see people open them and have this little reminder of who they were 25 years ago and reflect on who they’ve become,” Dellamora says.

As alumni opened the letters, some cried, some chuckled, and some shook their heads at the dreams that their not-quite-adult selves had for their futures.

Azmat Tanauli grinned as he read his brief letter aloud to his friends. “In 25 years I will be an engineer living in Pakistan, thinking about going into politics. Inshallah (the good one).” Inshallah, he explained, means “God willing” in Arabic. Although Tanauli was an electrical engineer, he never returned to his native Pakistan, and he hasn’t gone into politics.

“Apparently, God was not very willing,” laughed Tanauli, now a software developer in product management for Oracle in Silicon Valley. “But I still have not lost that dream.”

Most alumni had no idea what to expect when they opened their letters, and many, like Tanauli, didn’t even remember writing them. Some, including John Wareck, were disappointed to learn they had not written letters. Instead, Wareck turned in a copy of The Transcript, the OWU student newspaper. “Because that’s all I was then,” says Wareck, a journalism major who says he spent all his free time at OWU — including all-nighters — writing, editing, and laying out the paper. He eventually went into real estate in New Haven, Conn.

Jules Clemo Tutkovics of Chagrin Falls, Ohio, burst into tears when she read her letter, which offered a hello to her unborn children and predicted she’d be driving a green Volvo station wagon. “Do they even make station wagons anymore?” she wondered as she celebrated the night with OWU classmates who have remained lifelong friends.

Among those close friends was Annie Halpin, whose pencil-written letter predicted that she’d be celebrating her 24th wedding anniversary (true) and thinking about colleges for her children (also true). “Everything’s exactly as I said,” says Halpin, a stay-at-home mom from Chicago. “It’s uncanny.”

For Dellamora, who went by Lisa in college but is now known as Stella, the readings were the culmination of 25 years of careful protection. Most recently, Dellamora kept the letters in a plastic zip case, like the kind blankets come in, under her bed. “These letters have been with me every place I’ve lived since Ohio Wesleyan, and I was terrified I was going to lose them,” she says.

“They’ve traveled with me from Ohio to Barrington, Ill., to Chicago, Ill., to Palatine, Ill., to Worcester, Mass., to Detroit, Mich., to Boston, to West Palm Beach, to Manchester, N.H., back to Boston, and then to New York City.”

25 Years Ago Someone Had a Great Idea

Just how and why the letters were written is something of a mystery. Dellamora recalls the germ of the idea came in her sophomore or junior year from her sister, who had written a letter her first day as a freshman at the University of Richmond and then opened it when she graduated.

“I thought that was a cool concept, but clearly we had missed the starting point,” she says. So when she and another student were organizing their OWU graduation baccalaureate, she decided to pass out large index cards and ask everyone to write a letter to themselves, to be opened in 25 years.

“There was no particular significance to 25; I just thought the idea of being 46 or 47 years old seemed really, really ancient,” Dellamora says. “I thought, ‘What if we opened a letter to ourselves in the future when we were really, really old?’ ”

A third of the 454 graduates of the class of 1992 took her up on the idea, composing their notes at the baccalaureate or dropping them off later at Dellamora’s dorm room.

“Now, 25 years later, people can get excited about the messages they gave themselves when they were so innocent and young and had no idea how this world is,” she says. (Letters belonging to alumni unable to attend the reunion were mailed to them.)

At least one letter writer credited OWU’s chaplain for the idea. The letter Doug Pierson wrote says: “As assigned by Chaplain Jon Powers, I have been asked to respond to the following comment: ‘In 25 years I will be:’”

Powers, as it turned out, was at the 1992 reunion dinner. He says he’s always had a special relationship with the class because he started as OWU chaplain the year they were freshmen. But although he vaguely remembered the letters, he wasn’t sure either whether they were his idea.

Pierson’s letter continued: “In 25 years I hope to have accomplished many things. Finishing my tour in the Marines in 4 years. I will go on to Grad school. I wish to open up my own small business franchise and become successful. I will be happily married and live on the East coast. I hope to never lose my adventurous spirit and continue on doing wild things like rock climb, scuba dive, explore strange & unusual areas, and travel. See ya in 25 years, bud. Semper Fi In Hoc.”

Some of the letter’s predictions were spot on: Pierson is married and has a master’s degree in business. He’s had plenty of adventures, including climbing Mount Everest in 2008 and sneaking up into the OWU bell tower a year after graduation with some buddies (he was banned from campus for a year for that stunt).

But he lives on the West Coast, not the East Coast, and has remained in the Marines for 25 years, now as a reservist. Rather than running his own business, he leads a team of venture and integration IT specialists for Microsoft in Seattle.

“I think it would be pretty creepy if I opened the letter up and all of it were true,” Pierson says. “But I’m glad I was serious about it, and I’m impressed that someone kept the letters.”

Amy Lyon MacDougall wrote that she hoped she’d be healthy, wealthy and wise, married, in love with a wonderful man, have three kids and a summer house, and weigh 140 pounds or less.

“I was surprised,” says MacDougall, a commercial realtor. “I thought I would have written some snarky note.”

Her letter, she concluded, was accurate in spirit. She married and is now divorced; is in love with a wonderful man (her 6-year-old son) and still is within her target weight. She has no summer home, but, hey, she lives in Sarasota, Fla., she notes.

Tricia Taylor-Lyphout, who goes by Minnow, was surprised when Dellamora told her before the reunion that she’d written a letter. Her senior year, in addition to a full load of classes, she worked full time as a bartender at the Delaware Hotel so she could pay her tuition.

“I had to work my butt off,” says Taylor-Lyphout, who majored in broadcast journalism and dance theatre. “I had specific targets of cash I had to make every week to pay my tuition; I remember being so exhausted my senior year.”

She was too busy working and studying to attend most of the graduation activities, including senior parties. “I hope what I said in the letter was insightful and makes me happy,” she mused before the reunion. “I’m interested to see if I mentioned the guy I was engaged to then, because he stopped making payments on my engagement ring, and it got repossessed.”

In fact, she did mention him: “In 25 years I will be married to (deleted upon request). We’ll have 2 kids, 2 dogs, 2 cars and 2 incomes. I will be a reporter – big-time network gig I hope. Darcy Pennoyer will live next door to me and we will wash our cute little convertibles together.”

Although she and her classmate Pennoyer, who lives in New Cannan, Conn., and is Darcy Smith now, are still friends, none of her predictions came true. Taylor-Lyphout has three kids and one dog, is divorced (but not from her college fiancé) and has no convertible. She was a journalist for 10 years but now is an epidemiologist in Toledo. “But I have a much better life,” she says as she looks around at her former classmates. “Sitting here with my friends, I know the most important thing is that we’re still friends and we have a really heartfelt connection with each other. I’ve learned that no matter how broken the road, it always leads back to campus.”

And the hard work to graduate was worth it, she says.

“Ohio Wesleyan really did open a whole new world for me,” she says. “There were so many things I would never have considered a possibility if I hadn’t gone there.”

Those who hadn’t written letters, about half of the alumni in attendance, had to enjoy their peers’ trips down memory lane. “I don’t remember squat from when I was 22, so it would have been fun to have it,” says S. Craig Castor, president of an IT company in Greensburg, N.C.

He isn’t surprised, though, that his 22-year-old self hadn’t bothered to write a letter to his 47-year-old self. “I even thought about not going to graduation,” he says, “but my mother made me.”

His friend Tom Forestieri, who also had no letter, was bummed out but resigned. “I don’t know if I want to know what I was thinking of at that time,” says Forestieri, who runs a guide service for backpackers and skiers in the Boulder, Colo., area.

Despite having the letters for 25 years, Dellamora waited to open her own until the reunion. She wrote it, she recalls, sometime after the baccalaureate ceremony with her friend Dana Farmen (now Dana Cilluffo), as they partied in her room.

“I wrote that I was too stressed out. So what else is new?” Dellamora says after reading it. “I told myself to slow down, relax and try to be happy. And I had one last word: Someday the fairy tale will happen, and if it never does, at least I had some fun looking.”

She is happy these days, she says, after earning her Ph.D. in education, she runs Balance Between Inc., a company that helps educators “be more awesome.”

“I’m so thankful I have the privilege of doing something that makes me happy and helps other people,” says Dellamora, who lives in New York. “I’m so lucky.”

At the reunion dinner, alumni had the opportunity to write a second letter, to be opened at their 50th reunion. And, once again, Dellamora has volunteered to keep them safe for the next 25 years. 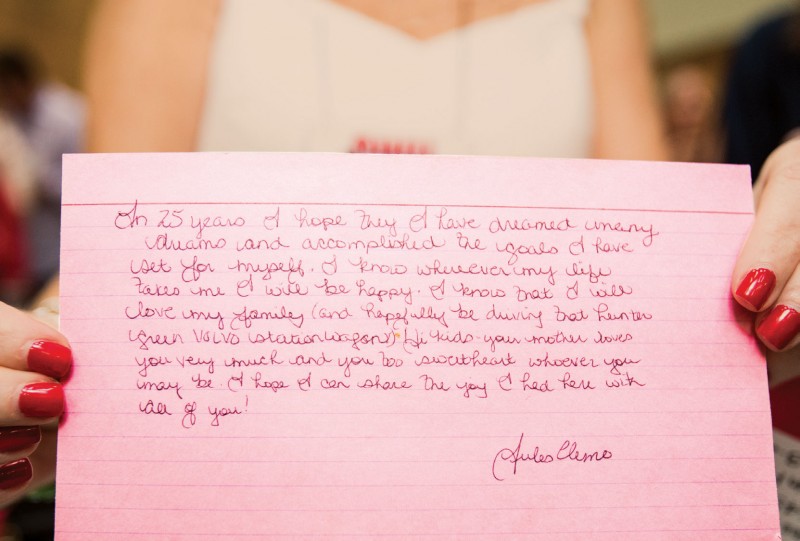 Kathy Lynn Gray is a freelance writer in Columbus.

Return to the Fall 2017 OWU Magazine