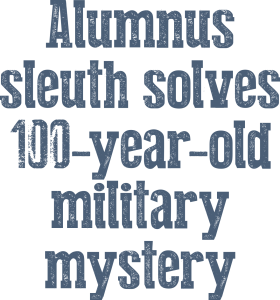 David McQuigg ’92 remembers playing with the interesting-looking box as a kid, taking it out of one of those old suitcases with the hard sides. Maybe it was always there in the crawl space of his childhood home at 340 N. Liberty St. in Delaware, Ohio. Details and memories surrounding the box, which is shaped like a shield with an American flag on it, are fuzzy. Which is understandable given that the military pins, rank bars, and patch inside turned out to belong to a man who died in 1918.

The story of the Collord military memorabilia, and how it was returned to the family by way of Ohio Wesleyan, might never have been a story at all if McQuigg, retired as a detective with the Delaware Police Department, hadn’t been curious.

McQuigg was helping his father, Robert, a former chemistry professor at OWU, and his mother, Ruth, downsize last spring before their move to a retirement community. He recognized the box when he found it all those years later, from when he used to play with it as a child. They didn’t think anything of it back then. “I think Mom and Dad just shrugged their shoulders and said, ‘It’s probably your grandfather’s,’ ” McQuigg recalls.

This made sense, because his grandfather had also served in World War I. But something about the bars bothered McQuigg, who knew that his grandfather had been a private. So McQuigg did what any good detective would do – he began to Google, and he realized the details of the pins didn’t match his family history.

Which is about the time his mother reminded him about who had previously owned the house they bought around 1970 – James “Jim” Collord, an assistant professor of history at OWU from 1920 to 1925, and his wife.

At that point, McQuigg reached out to Ohio Wesleyan, where University records turned up Judith Collord. Judith’s late husband, also named Jim Collord, was a member of the OWU Class of 1950, and was nephew to the late professor. With Judith’s permission, OWU shared her contact information with the detective, who mailed the box of medals to her in Cary, North Carolina.

“I was just tickled pink to be able to get them back to her,” says McQuigg.

McQuigg knows something about the loose ends that can be torn by war. His uncle fought and died in Korea. He and his dad have both given their DNA in the hopes that his remains might be matched someday. As a detective, he has a natural inclination toward closure.

Judith, who turned 90 in June, didn’t know the box existed. “I was shocked,” she says. “It’s the kind of thing you hear about on TV.”

Judith believes the items in the box belonged to Clarence Collord, brother to the Jim Collord who taught at OWU, and uncle to Judith’s husband. (Judith notes Clarence’s sister “Aunt Edith,” had a way of clarifying pronunciation for those who would say “Coal-lard”: “I’m not a pig, I have the ‘lord’ in my name.”) 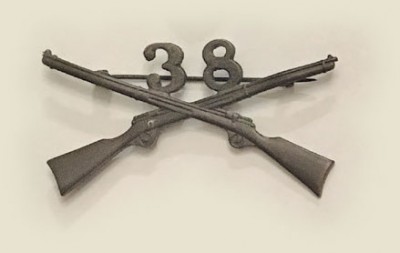 Clarence was a first lieutenant in the Army’s 38th Infantry Regiment, 3rd Division. He was killed on either Oct. 9 (according to The University of Vermont in the Great War) or 11 (according to the American Battle Monuments Commission), 1918, one month before Armistice, in France, in the largest battle to that point in U.S. history, the Meuse-Argonne Offensive. He is buried in the Meuse-Argonne American Cemetery in France.

After OWU, Uncle Jim remained at least part time in Delaware and also Winter Park, Florida, and married twice and had four daughters. He died in 1976.

The younger Jim returned to Buffalo, New York, where he met Judith and he became a pediatric dentist. After Jim was diagnosed with cancer, they moved near Raleigh, North Carolina, so he could receive treatment. He died in 2004 at the age of 79.

After the box arrived in the mail from McQuigg, Judith distributed it and the pins to her son, Tom, who lives in the Netherlands, and daughter Patricia Collord Besch, who lives near Buffalo. Patricia’s son Maxwell is an Army Ranger and sniper in the 10th Mountain Division.

Patricia was especially pleased to have the connection to her father, who was a pilot in WWII, returned. “It means so much to me because my son is in the service, my dad was in the service, and I just feel like to have them returned is amazing,” she says.

There are still some questions, as one might expect with war and the passage of time.

McQuigg remembers that something like an old luggage tag saying “Geo. Collord” was in the suitcase, which could mean some of the contents belong to another Collord; Jim and Clarence’s father, also named James, was a major. Their uncle and grandfather were both named George. 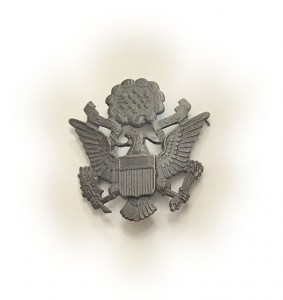 Heather McLaughlin, whose father was first cousins with Judith’s husband Jim, is the unofficial keeper of the Collord family history. She has the WWI victory medal that was sent to Clarence’s family after he was killed, and the certificate for the Silver Star he was awarded posthumously, signed by Gen. John J. Pershing, who led the American Expeditionary Force in the Meuse- Argonne Offensive.

No one knows what happened to the Silver Star.

But maybe it’ll turn up. Someday.