The Only Way to Be a Great Dancer

Adapted from the 2018 Commencement address by Paul Schimmel ’62, Ph.D., Hahn Professor of Molecular Medicine and of Chemistry at the Scripps Research Institute, formerly with the Massachusetts Institute of Technology, where he was MacArthur Professor of Biochemistry and Biophysics. He is author or co-author of about 500 scientific papers and an elected member of the National Academy of Sciences, National Academy of Medicine, National Academy of Inventors, American Philosophical Society, and American Academy of Arts and Sciences. He is the co-founder/founding director of seven publicly traded biopharmaceutical corporations and of a number of private corporations. 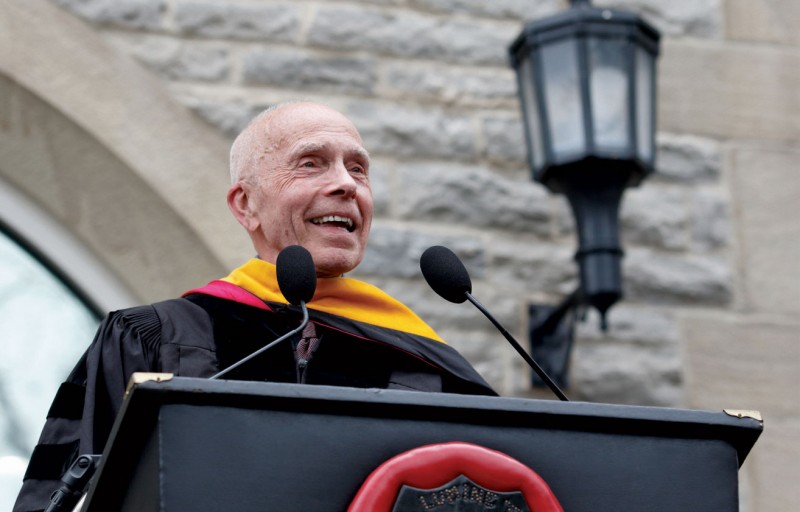 Today I will tell you the only way to be a great dancer.

First, let’s go back to 1842, to a woman named Lavinia Warren. She was 32 inches tall, but in every way a woman with the same feelings and emotions as us all. But an outcast. So, she joined a circus, to be a curiosity like an orangutan.

Now forward to 1988 at Massachusetts General Hospital. The chief of pediatrics is with the teary parents of an infant girl who will die in a few days.

Why did I tell you those three stories? They are medically related and summarize where I had arrived in my thinking and why I had the life I did.

Along the way, I saw a great dancer being interviewed. He was asked: “How do you become a great dancer?” He said: “Study books and diagrams and work at it. Also, watch and imitate what you see on a video and you will be better. Get a teacher, and be better yet.

“But there’s only one way to be a truly great dancer: Just get up and dance like no one’s looking.”

Why: Because self-consciousness, what other people think, and self doubts hold you down.

Back to the Massachusetts General Hospital and the dying infant girl. The pediatrician suggests an experimental (not yet approved) drug under development. He gets lots of criticism from other doctors, pushing back. But he moved ahead anyway, got approval from regulatory authorities. That was 30 years ago. Today the infant girl is a wife and a mom, living a normal life.

What about the woman dying of sepsis? One of the companies I started developed a medicine for sepsis. We were far from approval. We called the FDA. We talked to the parents. With approval from both parties, we injected her. She revived. She went on with her life.

I asked our CEO years later, after the drug got approval, “How many people would not be living if we hadn’t started this company?” After aggregating data the answer was: 300,000.

Now, Lavinia Warren. She had a defective gene that controls growth hormone production. But the hormone was not available. One of two founders of Genentech wanted to prove he could make it by recombinant DNA methods. He had enormous pushback, because this was considered at the time to be dangerous genetic engineering. He pushed through. That became standard therapy for any child diagnosed with the defect. Now that child can grow to normal stature.

In all three cases people pushed through the dogma and consensus that holds you back. If you don’t, then “You will some day look back and realize that your life was the result of other people’s thinking” (Steve Jobs). Echoed by a line from singer Bob Seger: “I wish I didn’t know now what I didn’t know then.”

Now, another graduation ceremony many years ago at MIT. President Jerome Wiesner gave the commencement address and reflected back on his previous commencement speech. He’d heard a graduating senior say, “Dr. Wiesner said something that day that was more important than my entire four-year MIT education.”

Wiesner went out after the ceremony and found the student and asked: “What did I say that was so profound?’ ”

The student said: “I lined up to receive my diploma. When my name was called out, I walked across the stage. You handed me my diploma. Then, you put your hand on my back, gave me a push and said: ‘Keep moving.’ ”

Just keep moving. Dance through the dogma and consensus as if no one is looking.