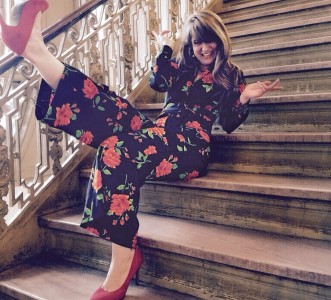 Morgan Treni ’12 has a confession to make. As an Ohio Wesleyan freshman, she sometimes sneaked into Hamilton- Williams Campus Center at 5:30 a.m. to sit at the grand piano and write songs.

Treni’s early morning efforts resulted in her first album, 2014’s The Dreamer and Other Essays, hailed by one music critic as “an impressive recording by a well-developed, literate singer-songwriter whose college major in writing comes through.”

Fast-forward to June 27, 2018, and Treni – with her band Morgan Treni & the Landscapes – released a second album, Alphabet City.

Instead of the jazz-folk flavor of The Dreamer, the new album rocks harder with “a lot of dynamics, genres, and colors,” Treni says. But it still contains all-original music penned by Treni, an English major with a nonfiction writing concentration.

“Everything started with my writing degree,” Treni says, noting especially “two pivotal professors at Ohio Wesleyan who inspired me:” Tom Burns and Michelle Disler, formerly with the English Department.

Treni still recalls the life-changing advice shared by Burns, who retired in May: “Class, you can get anything you want in the world with rhetoric.”

“I will never forget that opening phrase,” Treni says of her first day in Burns’ class. “It never fails to encourage me.”

Since graduating, Treni has created both a record label, Lobsterstage Records, and an upscale live-music provider, Golden Estate Entertainment, which serves the New York communities of Manhattan, the Brooklyn waterfront, northern New Jersey, and Westchester County.

“I have continued to grow into my writing degree since I left Ohio Wesleyan,” Treni says. “It’s really the gift that keeps giving, but I did find a safe space to begin exploring my identity on campus.”

Learn more about Morgan Treni & the Landscapes online at www.morgantreni.com.