Sal Syed ’03 has an unusual explanation for the recent improvement in his golf game. He credits his zero handicap not just to hours at the driving range or good clubs. Instead, the athletically gifted former captain of the Ohio Wesleyan tennis and cricket teams says: “It’s the power of data.”

That answer makes sense coming from the co-founder of Arccos Golf, a company based in Stamford, Conn., that deploys GPS technology and data analytics in products designed to analyze a golfer’s game and improve decision-making on the course. 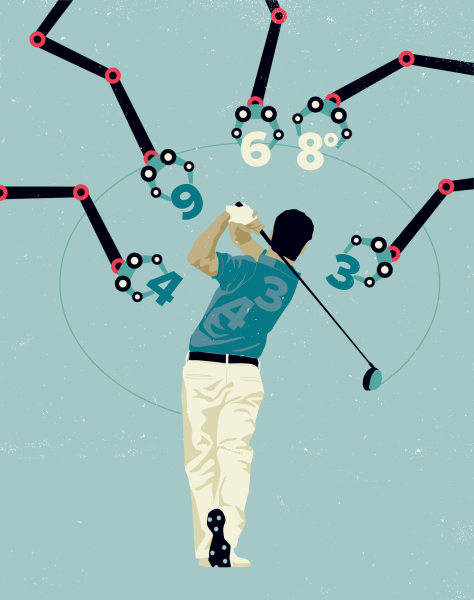 Syed’s work developing Arccos, combined with his past startup experience, has provided him with an insider’s perspective on how the ability to collect and analyze data can give a business an edge. Syed, who majored in computer science and mathematics at OWU, sees the field as the next frontier in technology.

“We have a saying in our company that data is the new oil,” he says. “It will power the next revolution.”

Syed is just one of many OWU alumni using data today, in fields as disparate as golf and liquor sales, and every possible number-crunching opportunity in between. Recognizing the seemingly unlimited potential applications, and responding to the interests of today’s incoming students, Ohio Wesleyan will introduce a data analytics major in the fall, offered through the Mathematics and Computer Science Department. The major will be rooted in OWU’s liberal arts tradition and combine foundational study in math and computer science with courses in data analytics methods, data visualization, science writing, and the social, ethical, and cultural impacts of data in our lives.

Syed founded Arccos in 2012 with his childhood friend Ammad Faisal, and Clinton Grusd, whom Syed met while pursuing a master of business administration degree at Yale University. Arccos’ shot-tracking technology and GPS are designed to provide shot locations and club distances to allow golfers to make better-informed choices that improve approach shot accuracy. The company’s performance-tracking system utilizes sensors that attach to a golfer’s club and log every stroke. The sensors sync with the player’s smartphone, delivering real-time data throughout a round.

Arccos has grown from a startup to a company that now employs 25 people. In January, Arccos announced a partnership with Microsoft Corp. using Microsoft’s Azure cloud platform and advanced analytics to leverage a player’s personal performance history, weather, elevation, course features, equipment selections, all the shots ever taken by the Arccos community, and more. “The resulting strategic advice will be smarter than anything that’s humanly possible,” says Syed, not overstating the possibilities within data analysis.

Job opportunities abound in data analytics, and a liberal arts education gives candidates and practitioners a leg up in the field. “Having a liberal arts background and a broad perspective helps you see patterns (in data),” says Sean McCulloch, an associate professor of mathematics and computer science who has been instrumental in developing the new major.

“It also helps you find the right questions to ask. Sometimes that can be harder than finding the answers to the questions.”

To McCulloch, an Ohio Wesleyan faculty member since 2001, data analytics is a fancy term for what has been done for a long time with statistical modeling and database management. What’s different now is the amount of data that’s available and the heightened level of interest in analyzing it in fields such as marketing, finance, health care, biomedical research, and the creative arts.

“Just about every field is finding ways to collect data,” McCulloch says, “but they often don’t know what to do with it.”

Eugene Ward ’74 has been working to make sense of data since his days in the publishing business back in the 1990s. After majoring in journalism at OWU, and stints in the newspaper industry, he went on to Maclean Hunter in Waltham, Mass. In the late 1990s, the communications company wanted insight on the demographics of subscribers to its commercial construction newsletter, and turned to Ward to provide it.

In addition to converting the newsletter to his first searchable database product, Ward used data analytics and predictive modeling, a process that uses data mining and probability to forecast outcomes, to isolate best prospects for the newsletter.

Ward’s tech engagements have included serving as a principal of Boston-based Cognetics Inc., which provided predictive models built upon proprietary data for use by Fortune 1000 companies, and executive sales positions with the Corporate Research Board and Mobidia, providing data on customers and prospects to major U.S. companies and mobile-communication operators. “It’s all been about working with large files (of data) and large analytic tools to manipulate those files and enhance a strategy to sell more stuff and save money,” he says, adding that a single predictive model can save millions of dollars for a company.

Ward, now retired but still working as a consultant, says data analytics was an exploding field when he started and one that has changed a lot in recent years. “The big challenge now is that there is so much data out there, so how do you make sense of it?” he asks.

“Crunching power used to be a limiting factor, but that is no longer an issue. It’s about defining a strategy to identify and build the best variables for a model and the best modeling technique to use. If someone can do that, they have an advantage in the marketplace.”

Holding a similar view is Hersey Liu ’09, who started focusing on data analytics in 2013 while working on a master’s degree in integrated marketing communications at Northwestern University. She now works as a data scientist at LinkedIn, the business and employment social networking service.

“I remember in my graduate school program when we worked with pharmacy companies to analyze their consumer behavior, a text file of 100,000 rows of data would scare us,” Liu says. “Then when I started at LinkedIn (in 2015), even the simplest query, such as how many people viewed a web page, would return millions of rows. So the greatest challenge in data analytics is how to dig out valuable insights from all the noises in the data.”

Liu, who majored in psychology at Ohio Wesleyan, decided to get into the data analytics field to understand consumer behavior from a more grounded analytics perspective. She has become convinced that data science, artificial intelligence, and machine learning (a type of AI that provides computers with the ability to learn without being explicitly programmed) will have a huge impact on future technology and people’s everyday lives.

“It’s already one of the most exciting topics in Silicon Valley,” Liu says. “Data science and machine learning will use data to understand and predict behaviors and then connect everything together. And artificial intelligence is going to power everything from self-driving cars to virtual assistants and much more advanced robots that will perform specific tasks.” 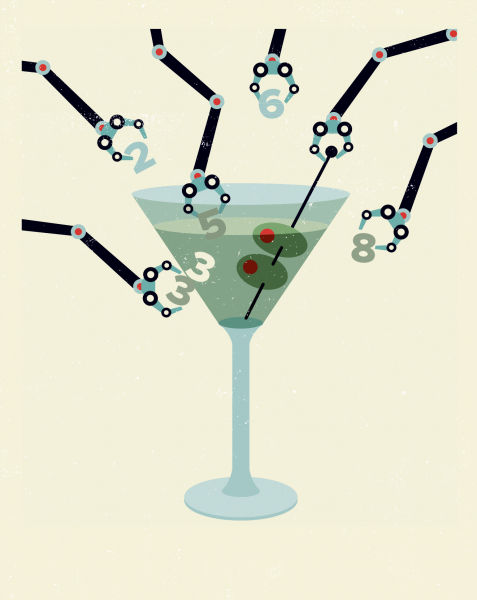 In New York City, Devaraj Southworth ’94 and Maxim Razmakhin ’10, are using data analytics as they build Thirstie, a tech company and e-commerce platform they founded in 2014 for the retail alcohol industry. By partnering with hundreds of licensed retailers, the company delivers premium alcohol products to consumers in 10 markets in less than an hour and to most U.S. and Canadian locations in under three days.

“We see a massive opportunity in this space,” says Southworth, Thirstie’s CEO, “and think data and analytics will be extremely valuable not only to Thirstie but also to large global spirits brands as well as local and national retailers.”

He notes that makers of those brands are prevented by law from selling their products directly to consumers, so they lack a clear understanding of who their customers are and why they do or do not buy their products. In addition, local retailers that sell those branded spirits to consumers typically lack even a simple online presence, let alone deep marketing or data expertise. Thirstie is built to help solve those problems for the brands and retailers, Southworth says, and data analytics is a big part of the equation.

Much of it involves being focused on understanding consumer preferences and purchases by analyzing data. It includes identifying Thirstie’s customers, why they buy certain products, when and where they make their purchases, how much they spend on a particular brand in a given month, how frequently they make purchases, and what type of content leads to an increase in sales. The sets of data number in the hundreds, and data analytics helps make sense of it all.

Thirstie’s co-founders note that 80 percent of today’s data was created in just the past two years, opening a whole new world of possibilities. “There is a massive amount of product inventory data that Thirstie has collected over the last two years,” Razmakhin says.

“We plan on developing machine learning tools to help us better understand this data and help retailers spot discrepancies, anomalies, or other issues relating to pricing, product categories, or product titles, for example.”

Looking ahead, the Thirstie co-founders say the most interesting trends in data analytics are machine learning and making sense of boundless bytes of information whose volumes are such that they gave birth to the term “Big Data.” Used properly, that mountain of information can drive decisions that benefit commerce, spark improvements in medicine and science, and identify new ways to address poverty and other socioeconomic problems. Unfortunately, data analytics also poses a threat to consumers’ privacy and raises ethical concerns about how all that data is being stored, shared, and used.

“That’s something that we as a society need to address,” Syed, of Arccos, says. “With all this data, the potential for abuse is there. We all have to figure that out, and we’re not there yet.”

Considering the ethical implications of data usage is something that will be examined in DATA 250: Social, Ethical, and Cultural Impact of Big Data, a required course planned for the new data analytics major.

Razmahkin and Southworth are convinced that the liberal arts education they received at OWU provided a foundation for their success as entrepreneurs and technology practitioners.

“Absolutely,” says Razmahkin, who was named to Forbes magazine’s “30 Under 30” list in the food and drink category for 2017. “OWU not only provided me with a foundational liberal arts education but also real-world experiences critical to advancing my career. That’s in addition to my amazing classmates, professors, advisors, and alumni. The nurturing community is something that really makes OWU stand out.”

Southworth says his four years at Ohio Wesleyan taught him how to be passionate, creative, and collaborative in his work. He also learned how to listen actively and question everything.

“Perhaps even more importantly, OWU gave me the opportunity to put theory into practice in many instances—something quite rare on the undergraduate level,” says Southworth, whose résumé includes building a digital agency with more than $10 million in sales that was sold to an Inc. 500 company (one of the top 500 fastest-growing companies in the country) and working for American Express, Accenture, and Deloitte.

Ward says the journalism training and liberal arts education he received at Ohio Wesleyan taught him how to ask the right questions in his business career. Liu remembers how being exposed to research methods in her psychology and science classes provided a foundation in statistics and helped her develop a scientific mindset. And Syed feels his broad liberal arts education gave him “rounding” that he wouldn’t have had if he had taken only engineering and computer science classes.

“You study music, art, and other things at OWU,” he says. “It broadens you in how you connect with different types of people—and OWU was an amazingly multicultural place. It sets you up for a different course in life.”

For Syed, it’s a course that his new golf technology, with the use of data analytics, is helping him explore more fully.

– Jeff Bell, with illustrations by Patrick Kastner. Jeff Bell is a freelance writer in Columbus.

Sidebar: Data on Campus: OWU and the Numbers Game