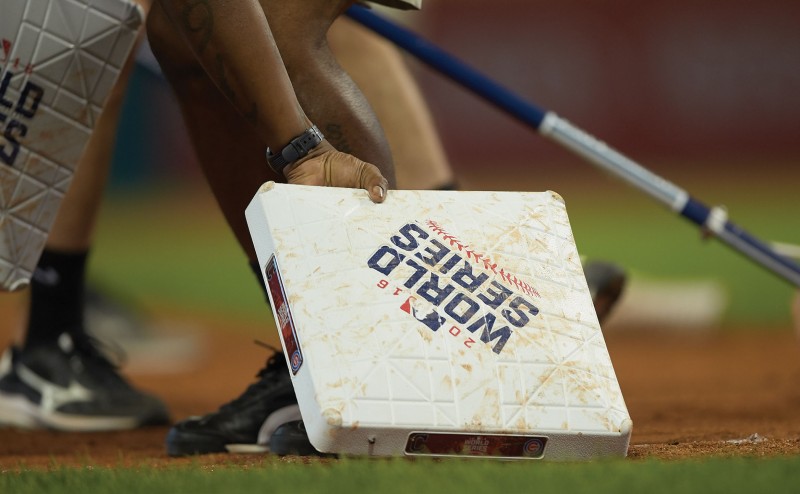 For Bob DiBiasio ’77, and all Cleveland Indians fans, Game 7 of the 2016 World Series was sheer anguish. The Indians were this close to achieving their ultimate goal—a world championship for the first time since 1948—only to be defeated by the Chicago Cubs (who hadn’t won the title since 1908).

But few inside Progressive Field in Cleveland on Nov. 2 were as close to the agony as DiBiasio, who has been a public relations executive with the Indians since 1979, almost his entire career, minus a year with the Atlanta Braves. “You ask any of my buddies in college, they’ll tell you that when we would sit around and say, ‘What are you going to do with your life?’, I’d say: ‘I want to be the PR man of the Cleveland Indians’,” DiBiasio recalls.

DiBiasio played one year of basketball and two seasons of baseball at Ohio Wesleyan and was sports editor of The Transcript. Like many others, he praises the teaching of legendary journalism professor Verne Edwards. “We had some incredibly talented, passionate, serious student journalists that have gone on to really have incredible careers,” says DiBiasio, who went on to exactly the career he aimed for.

As he found his niche with the Indians, DiBiasio retained his close ties to OWU, and to the friends he made, particularly those in his fraternity, Phi Gamma Delta. “(I made) lifelong friendships with many of the guys that have meant so much to me,” he says.

A dozen of his fraternity brothers (and one interloper, Bob notes), meet annually after Labor Day in northern Michigan for the “OWU FIJI Invitational,” a Ryder Cup-style golf tournament. “We’ve been doing it for 25 years, and nobody misses. It started as a weekend golf thing and now it’s a weeklong golf.”

DiBiasio will have plenty of stories to tell this fall.

As anyone close to the team will tell you, being a Tribe fan isn’t easy. The Indians made it to Game 6 of the 1995 World Series, only to succumb 1-0 to the Atlanta Braves. And in 1997, as The New York Times put it, an Indians title was put in writing—until, in Game 7, the team lost a lead in the ninth inning and was defeated 3-2 in the 11th by the Florida Marlins.

Then it happened again.

Three days after the painful loss in the deciding game against the Cubs, DiBiasio recalled the view from his suite at the stadium, where he watched the game with his family and Indians greats from the 1990s, including Jim Thome, Kenny Lofton, Dennis Martinez, and manager Mike Hargrove.

The Indians were behind 5-1 in the fifth inning of Game 7 when hope burst forth. DiBiasio, who was once named by Sports Illustrated as the PR director of its Major League Baseball “dream team,” watched in disbelief as the Tribe rallied in a most unusual way, scoring two runs off a wild pitch.

“You’re sitting there with Kenny Lofton when Jason Kipnis scores from second base on a wild pitch, which Lofton did in 1995 in Game 6 of the American League Championship Series in Seattle off Randy Johnson,” DiBiasio recalls. “You’re like, this is just too unreal. You never score from second off a wild pitch, and here we did it in two postseason games. We’re watching one happen in front of us and standing next to the guy that did it. We’re hitting Kenny and squeezing him like he’s a rag doll.”

That play cut the Cubs’ lead to 5-3. Each team would add a run. Then, in the eighth inning, Indians outfielder Rajai Davis hit a two-run home run, tying the game at 6.

“Rajai hits that line drive BB to left field for a home run. I swear to God, Travis Hafner, Jim Thome, all of us were jumping up and down like we were 5-year-olds on Christmas Day.”

The game went into extra innings and the irrepressible Cubs scored twice in the top of the 10th, taking an 8-6 lead. But hope surged again in the bottom of the 10th, after a single by Davis drove in a run to make it 8-7.

Could the Indians pull off a “walk-off” win, scoring two more times in the bottom of the 10th?

“We had walk-off wins 11 times during the regular season. It would be so appropriate for this team to do it in Game 7 of a World Series.”

But they didn’t, not this year. The dream, so close to being realized, ended.

“So, then you just sit there. The finality of it all in my world, that you’ve just had this incredible seven-month journey. The finality of it all, even though we know it because we’re in the business, it just smacks you, it just smacks you right in the face. No one knows what to say. Certain people in the suite are crying. And then you walk into the office. A lot of young people sitting on the floor just stunned and not sure what they just lived through because they’ve never experienced anything like that in their life on such a grand scale.

“There’s a passion we have for what we do, and to lose Game 7 in extra innings, and you go this far and you don’t win, it’s absolutely supposed to sting.

“But the sting will fade.”

– Tom Kertscher is a PolitiFact Wisconsin reporter for the Milwaukee Journal Sentinel.