Michael Long ’66 is just the kind of alumnus to whom the phrase “Bishop for life” applies. In his more than 50 years of connection to Ohio Wesleyan, Long has gone from student, to alumnus, to chairman of the Board of Trustees, with many philanthropic and volunteer roles along the way. He is now a Life Trustee. For his decades of fervent support for OWU, the Alumni Association Board of Directors honored Long with the Alumni Award last May at his 50th class reunion.

Long began to hone his leadership abilities as a student. He served as president of the Gamma chapter of the Sigma Chi fraternity, sat on the Interfraternity Council, and played on the varsity soccer team. “I thought I was going to do pre-medicine as an undergraduate,” he says. “But my freshman year I was taking chemistry five days a week at 8 in the morning and decided I wasn’t cut out for that.” 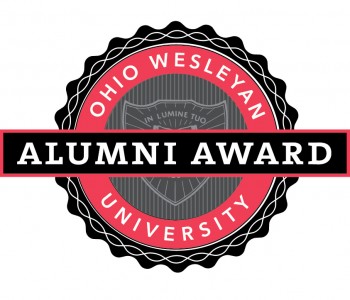 In the end, he listened to Pamela Blazer Long ’66 and went on to a long and accomplished career as a litigator at Vorys, Sater, Seymour & Pease in Columbus. “I had the pleasure of working my entire career with really smart, really good lawyers, and that helped me tremendously in my professional development,” Long says. “Being with that level of lawyers made me a better one.”

Long first joined the Alumni Board nearly 30 years ago. His six-year term, which ended in 1994, was so positive that when another call came in 1996 to run for an open position on the Board of Trustees, he readily agreed, going on to serve as vice chair and eventually chairman.

He also has volunteered with his fraternity, acted as Class Giving Chair, and helped plan his 50th reunion. He and his wife are both members of the President’s Circle and Tower Society.

“Through my experience on the Board of Trustees, I have dealt with many things I had given no thought to as a student,” including budget issues, faculty concerns, and how to make the University competitive and successful, Long says.

He thinks there’s always room to make OWU even better.

“We need to continue to develop the endowment of the University to provide continual financial resources,” he says. “We also need to give attention to residence halls, particularly freshman residence.”

But Long knows some things are always going to be exceptional. “We need to continue to support the great faculty, and I think we’re doing that,” he says. “We’ve always had outstanding faculty.”