On a busy and historic weekend in our nation’s capital, Ohio Wesleyan was well represented at both ends of the political spectrum. Twenty students attended the inauguration of President Donald Trump on Jan. 20 in Washington, D.C., along with two staff members. The next day, about 150 OWU students, faculty, and staff attended the Women’s March on Washington. At least four OWU students attended both events. Here are a few of their reflections about their experiences. 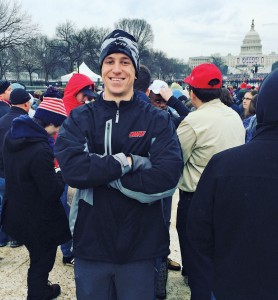 As we arrived in Washington, D.C. early Friday morning, we were anxious to see what the rest of the day had in store. When we entered the viewing area on the National Mall, our group of students and faculty was pleasantly surprised at the sighting of Fox News and reporter Pete Hegseth. As the news went live, some of the group (including me) crowded behind Hegseth to get on live TV. A neat experience. Then a popular figure, “The Naked Cowboy” dropped by and was an immediate crowd favorite.

As the ceremony began, thousands of people gathered around the large monitors within the boundaries of the watch area. The majority of the crowd were supporters of Trump; loud ovations occurred when Trump was shown on the monitors. I was amazed by the great number of people who came to witness the peaceful transfer of power (amid all of the controversy of the election). President Trump delivered a powerful speech that pleased the crowd. I was impressed with what he said. However, as we left, I saw several protests. The protesting grew and grew; eventually it lead to a large group of people taking up a whole block. I figured I would witness some protesting, but there was much more than I expected.

My overall experience was one that I will never forget. I got to connect with students and faculty that I had not met before. Everyone I talked to was polite and helpful with any questions I had. Going as a group from OWU made the experience even better. I won’t forget the memories created or the people I met on the trip!

Attending the Women’s March on Washington was very significant for me. It has forced me to confront and reflect about feminism in this country. I realized that I still have more growing and learning to do as a feminist. I am excited to take my experience back to communities that I am involved in on campus, including the Sexuality And Gender Equality house. This experience is applicable to my life after graduation because I want to work for a nonprofit dealing with women’s and/or queer issues.

I’ve always been fighting. Ever since I was ignored when I volunteered to help teachers because I wasn’t a boy. But saying I’ve been trying isn’t enough. I marched because I was done with only doing little things to combat the issues women face. I marched, for when we ignore problematic speech because we don’t want to push buttons or actually deal with issues, we end up being complicit in the very ideas we abhor. I marched. And for me, it was the catalyst to stop hiding behind forced kindness and stand up for what I believe in.

Going to the Women’s March on Washington was an affirmation, seeing so many people united and fighting for a common cause. It was amazing to see the pride and determination in people’s faces as they chanted, and it made me appreciate being a feminist even more. As a creative writing and theatre major and a women’s and gender studies minor, I like inspecting different narratives and how they’re created, and this march was certainly one that will go down in history. I look forward to doing some activism work, through whatever avenue I can, and the march affirmed that’s what I want.