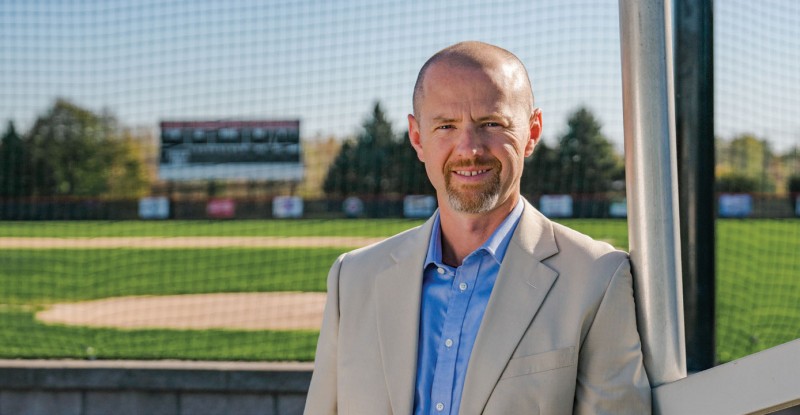 From the Field to the Faculty

The career of David Eastman was foreseeable, perhaps, depending on your viewpoint, even foretold. “I always liked school — from the time I was 7 or 8 years old, they called me ‘the little professor,’ ” recalls Eastman, now an associate professor of religion. As a child, he was fascinated by history. As a “pastor’s kid,” religion often occupied his thoughts as well.

“My interest in ancient history and my interest in religion came together, which is how I ended up focusing on early Christianity,” he says.

After a brief semi-pro baseball career in France and two years of teaching at Yale University (where he earned his Ph.D.), Eastman joined Ohio Wesleyan in 2011. He was granted tenure last year and lives in Delaware with his wife and three children. He enjoys the close-knit community that allows him to integrate his interests, both academic and beyond. The former player enjoys working with student-athletes as a faculty athletic representative, traveling occasionally with the baseball team, and talking to coaches and prospective student-athletes and their families.

“(Being at OWU) allows me to get to know students on multiple levels. I see them competing, I see them in the classroom — they know that I care about both, and I think that actually motivates them academically,” he says.

Eastman wants more than good grades for his students. “The burden is on me to show them that what I’m talking about has any relevance to their lives,” he says.

He points to “narratives that undergird Western society … which come primarily from the Bible,” lamenting that they are often misapplied. Eastman strives to equip his students with the knowledge and perspective to know when that’s the case.

For example, OWU students, like most college students, sometimes encounter people loudly bemoaning the sins of humanity. Many find this spewing about “fire and brimstone” to be unpleasant and choose to ignore it. But Eastman challenges his students to employ the Socratic method, suggesting: “If they quote a Bible verse to you, say to them, ‘What’s the context of that verse?’ ”

Eastman finds it quite telling that this question often disarms those who he believes are misapplying Christianity.

“If you’re brave enough … ask questions,” he urges his students.

Eastman tries to teach confronting ignorance with civil discourse, and, most important, he pushes students to be moral leaders in our global society, a favorite aspiration often cited by OWU President Rock Jones.

Eastman brings his open-minded inquisitiveness to his scholarly research. “I was taught by one of my doctoral professors not to go into (research) with a thesis. … I don’t want to determine the outcome; the outcome may be the opposite of what I want it to be.”

This mindset has served him well. In 2013, he won “Best Article in Patristic Exegesis” from the Institute for Classical Christian Studies for his writings about the apostle Paul. The article identified and examined a schism that occurred in early Christian North Africa. Eastman may be the foremost expert on the martyrdom stories of Peter and Paul and the traditions their legacies inspired, and is a frequent resource on the subject for his peers. Eastman believes the current understanding of Peter and Paul’s impact is often too narrowly focused on the most common narratives.

“I see an area in which I think we as scholars have been sloppy; there’s some imprecision, some blind spot we have perpetuated. It causes me to stop and say, ‘Let’s look very closely at this.’”

Beyond his research, Eastman exemplifies practicing what is preached. He advocates for children and victims of human trafficking worldwide. He has helped facilitate student trips to the Love and Hope Children’s Home in El Salvador. His family sponsors three children in Haiti. In the classroom and around campus, he constantly strives to raise awareness of human trafficking.

In 2014, he was honored with the Bishop Frances Kearns Faculty of the Year Award for outstanding scholarship, leadership, and service, in part because of these efforts. “I hope it means that students are getting more from me than just what’s on their tests. … I hope it means they’re getting what the liberal arts education i s about,” Eastman says.

See Eastman’s Spring 2016 i³ lecture “Why Are Abraham’s Children Still Fighting?’ at owu.edu/i3