George Gebhardt ’63 and his wife Joan Marie are pictured in Grindelwald, Switzerland. George earned his M.B.A. in marketing and finance from the Tuck School of Business. In 1965, his first jobs with PPG Industries were as controller trainee and cobol programmer. In 1968, he became text and monograph editor and manager of new ventures for Williams & Wilkins. He left the corporate world in 1976 and for 40-plus years was an independent IT technical writer. He also taught management at three Baltimore-area colleges. In 2008, the Gebhardts attended the Summer Olympics in Beijing. They’ve been to Europe three times, Nova Scotia 14 times, and Newfoundland three times, in addition to attending baseball games at many of America’s iconic ballparks. They live in Pikesville, Md., and Boynton Beach, Fla., and welcome visitors. 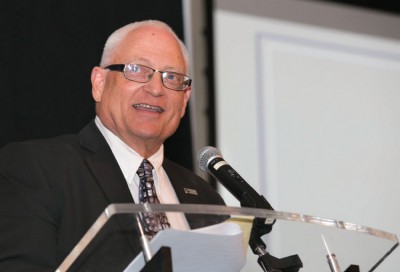 Stephen Tilson ’71, attorney at Hottenroth Garverick Tilson & Garverick Co., was honored by the Ohio State Bar Association at its annual awards dinner on Oct. 6 with the 2017 Ramey Award for Distinguished Community Service. A resident of Galion, Ohio, Tilson leads the School Parent Teacher League, campaigns for school levies, and serves on the Crawford County Community Mental Health Board and the Crawford County Business/Education Advisory Council. 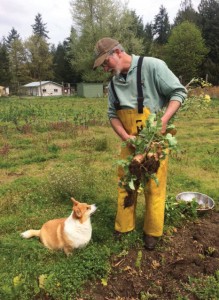 James Goche ’73: “My father, the son of immigrants, always had a large garden even though he could buy what we grew at the grocery. He understood the fundamental value of food. My family is continuing that tradition with the century-old farm that we saved from development near Olympia, Wash. Now we eat what we grow, sell our surplus commercially, and have teamed up with Kiwanis on half an acre to grow produce for the county food bank (4 to 6 tons annually). Kiwanis volunteers also get to see where food comes from and how agriculture and resource conservation can both support good stewardship of the land. After wearing several hats over the years (deputy prosecutor, lobbyist, administrative law judge, etc.), now as a farmer I appreciate in some new ways my OWU history classes (Dr. Macias, et. al) that gave me a better appreciation for the world’s societies, cultures, and foods.”

Shumate Honored by Who’s Who in Black Columbus

Alex Shumate ’72, managing partner, Squire Patton Boggs, was the main honoree at the 15th anniversary unveiling of Who’s Who in Black Columbus, held at Ohio State University on March 7. OWU friends were in attendance to celebrate Shumate, at a table hosted by President Rock Jones. Shumate, a former member of the OWU Board of Trustees, also received the publication’s lifetime achievement award.

Eighteen years ago, Charlie Hartigan ’75 founded OWU Legends Lacrosse, which allows former OWU men’s lacrosse players to don red and black once again and compete together in national tournaments. Now coordinated by Steve Corrigan ’74, the Legends participate in the Summit Lacrosse Tournament in Lake Placid, N.Y., each August and the Florida Lacrosse Classic in January. At the latter, the Legends competed in four divisions for ages 45 to 60 and older.

Recruitment for August in Lake Placid is underway, with more than 40 players registered. Anyone interested in dusting off the stick, gloves, and helmet to join the Band of Brothers (“Be Somebody, Be a Legend!”) can contact Steve Corrigan at stevecorrigan2@hotmail.com or Pete Lee at owu.legends@gmail.com. Save the date for the OWU Men’s Lacrosse 60th Anniversary Celebration Reunion at Homecoming & Family Weekend 2018. 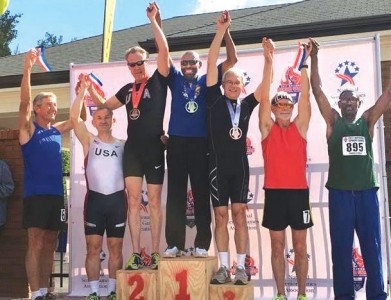 David Janson ’73 has been competing for the past 13 years in the 400- and 200-meter races of the master’s division of the USA Track and Field Association. In 2015, he was inducted into the Ohio Senior Games Hall of Fame. In 2016, Janson won the USATF 400 meters championship held at Grand Rapids, Mich. Last year, he won the silver medal in the 400 at the National Senior Games in Birmingham, Ala., where he is pictured here, third from left. 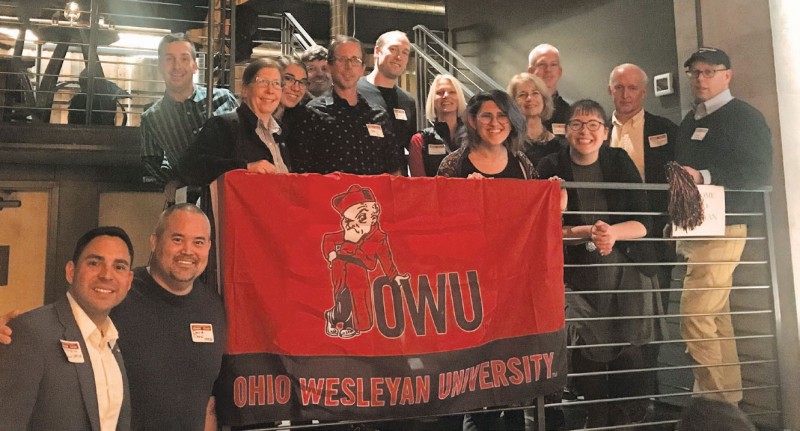 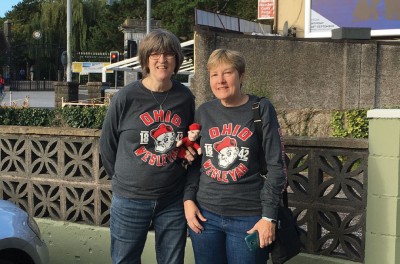 Tricia Meggison Kalinowski ’83 (left) and Lori Trego ’83 (right) toured Ireland together for a week in September. The former OWU roommates began their trip in Dublin and continued on to explore Northern Ireland, Belfast, Galway, Innisheer, the Cliffs of Moher, and Cork. “We had a great time together, minus the stress of driving on some very narrow streets (not to mention the ‘wrong’ side of the road), and it was as if all those years since graduation melted away,” Kalinowski says. The Bishop himself came along on the trip to “keep them in line.” Kalinowski and Trego look forward to catching up at their 35th reunion this spring.

The Next Generation of Bishops

No Bull About It, Alumnus on CBS Drama 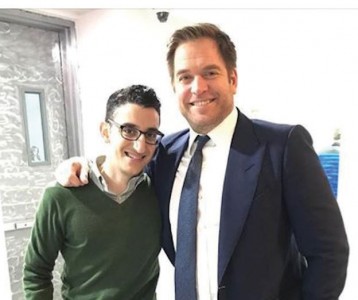 Ryan Haddad ’15 played the role of “Juror #2” on the Jan. 9 episode of the CBS television series Bull. He is pictured here with the star of the show, Michael Weatherly, whom he asked for a photograph to give to his grandmother for Christmas. Weatherly replied, “Well, that’s my demographic.” Haddad says that he, too, is Weatherly’s demographic. 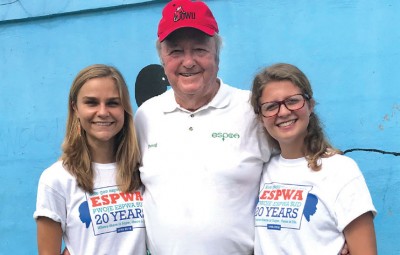 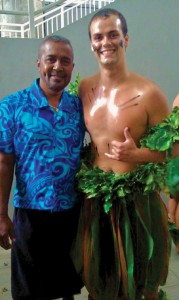 Alex Widman ’17, from Bucyrus, Ohio, is a member of Phi Gamma Delta fraternity: “I am serving in the Peace Corps working in the Fiji Islands. I arrived the first of September and will be on the island of Yanuca until December of 2019. I am the only American on the island. As a former British colony, they teach English in the schools and most everybody speaks some English. I am still learning the Fijian language, which is what is spoken at home and social events, etc. At present, my responsibilities include developing a library for elementary school students, assisting in the construction of a community building, and assisting in the planning for several other community projects. The good news is that the temperature never goes below 75 degrees and my machete skills are improving. The bad news is that I only have electricity a couple of hours each day and I have to take a boat 25 miles to secure groceries. Things are going very well.”

Anyone interested in donating English-language new or used books for students grades one through six may contact magazine@owu.edu. 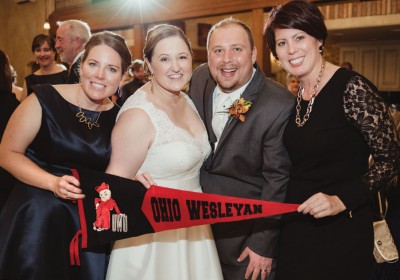 Janice Blair ’02 married Matthew Schwab on Oct. 1 in Estes Park, Colo. Joining in the celebration were, from left: Megan Maurer Hill ’02, the bride and groom, and Michelle Waltz ’02. 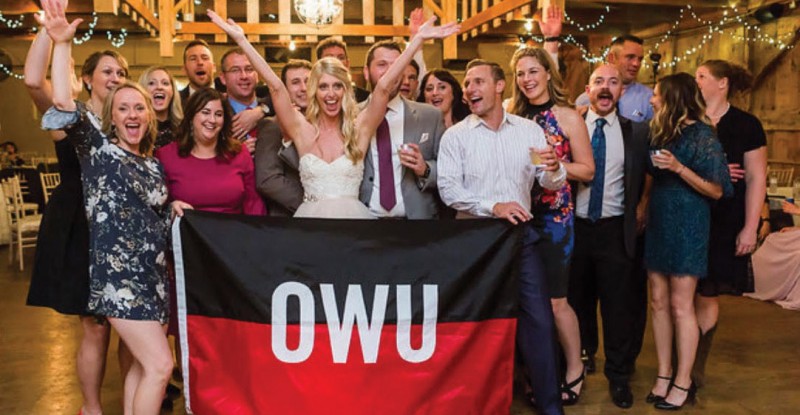 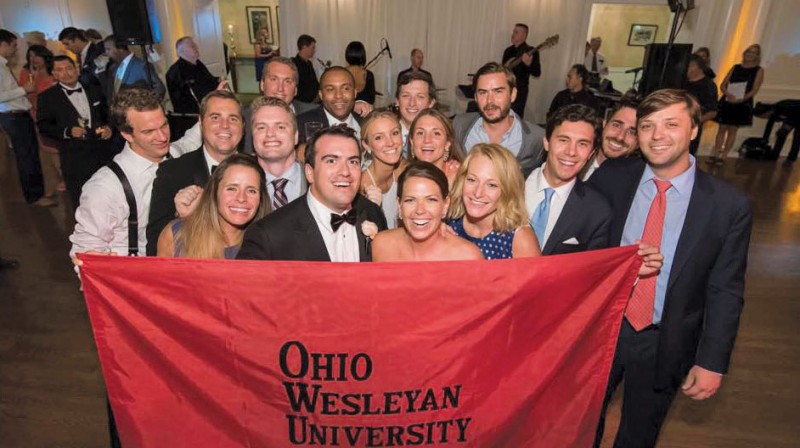 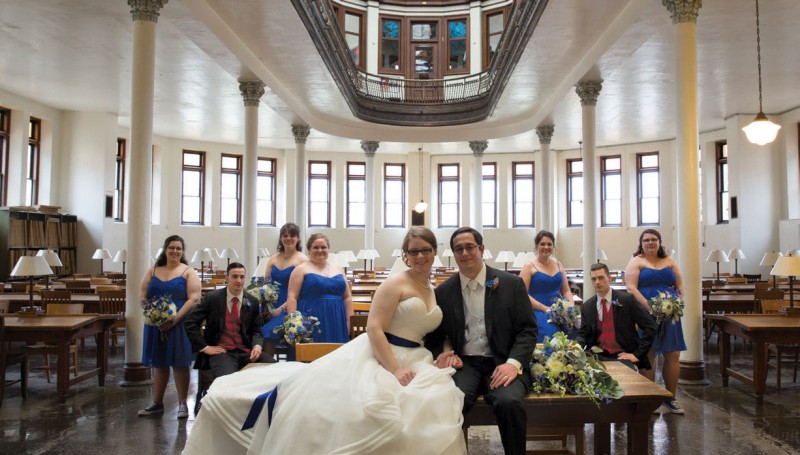 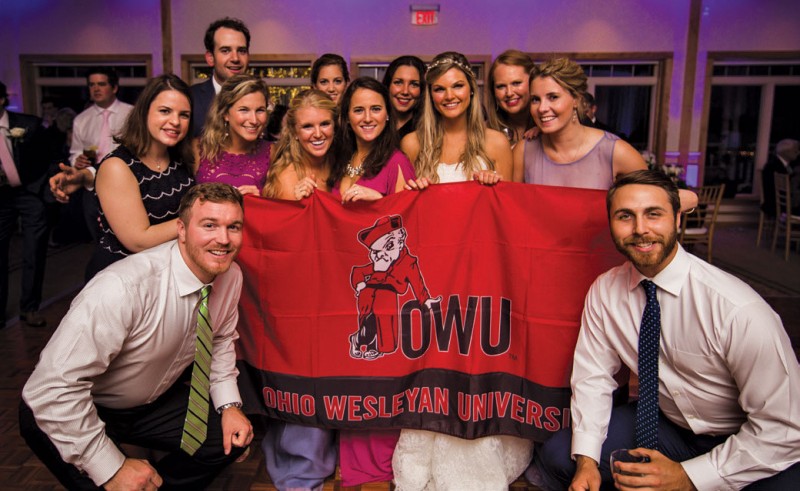 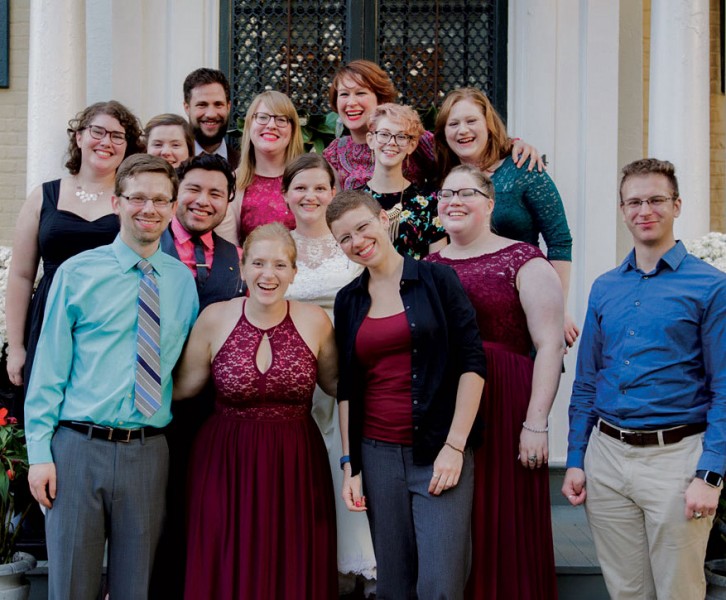 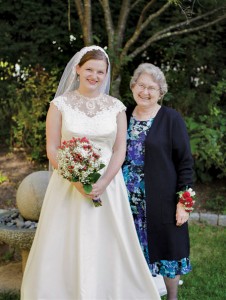