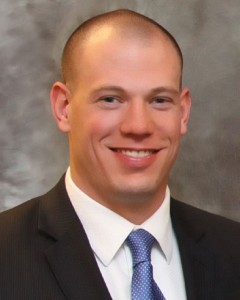 Living in Wooster, Ohio, Kyle Adams ’09 is a world away from Jeff Erdmann in Connecticut, but they orbit the same financial-planning universe.

Adams was ranked No. 100 on Forbes’ 2017 list of America’s Top Next Generation Wealth Advisors, which recognized 500 advisors across the country, all born after 1980. In February, he made Forbes’ Best-in-State Wealth Advisors List, coming in at No. 50 for Ohio. (Erdmann was No. 1 in Connecticut.)

The 31-year-old Adams is director of investments at the NiemiecAdams Financial Group of Wells Fargo Advisors in Wooster. His partner is his uncle, Dick Niemiec, who started the business in 1972 and brought Adams on board upon his graduation from OWU. Today, Adams says, the partnership of NiemiecAdams represents 350 households with $550 million in assets.

Adams says the Forbes recognition has been “kind of neat” but has no plans to leave Wooster, where that farmer in the flannel shirt working alongside him to build a new playground for the Kiwanis Club may be a multi-millionaire.

The soft-spoken native of North Canton, Ohio, said he loves Wooster, a northeastern Ohio town of 26,000 residents, home to Wooster College and the Wayne County seat. He’s put down roots and hopes to raise a family there. He lured his fiancée to relocate from Columbus, and the two are to be married in June. He already serves on the Wooster Planning Commission, is an active member of the Wooster Kiwanis Club, and in the fall, volunteers as the running-backs coach for the college.

Wooster reminds him of Delaware. He relishes the days he spent at close-knit OWU, where he played running back for the Battling Bishops football team and was a member of Phi Kappa Psi fraternity as he worked to earn his degree in economics.

The technology of money management is pretty much the same in Wooster as it is in Greenwich, Adams points out. To take care of its clientele of 350 families, NiemiecAdams is licensed in 33 states. One thing Adams imagines is different in his corner of the financial universe is his client base. Typically unassuming, they are certainly low-key about their wealth. “There’s a lot of millionaires next door. You would have no idea,” he says. “They don’t like to flaunt it, for sure.”