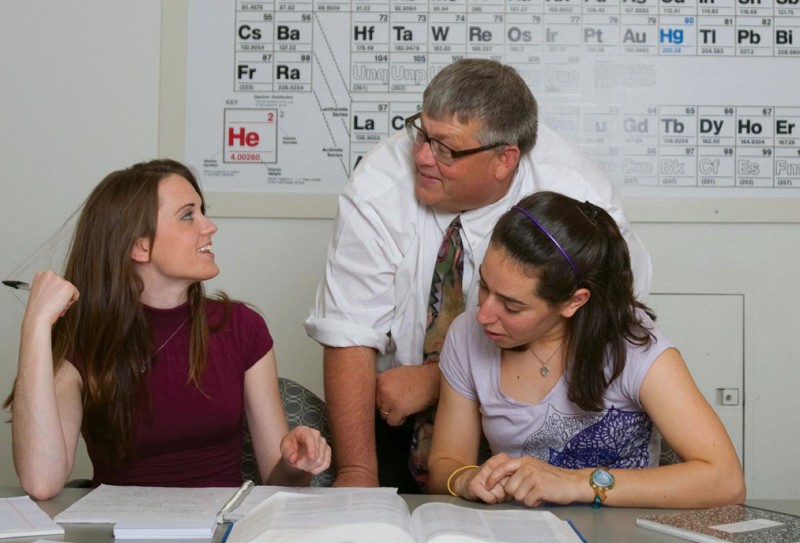 Dr. Kim A. Lance, a 28-year member of the Chemistry Department at Ohio Wesleyan University, passed away suddenly on Nov. 3.

Lance began teaching at Ohio Wesleyan in the fall of 1988. Over the years, he was awarded several teaching honors, including the Sherwood Dodge Shankland Award for the encouragement of teachers. He became the fastest-promoted faculty member in University history, serving as chair of the Chemistry Department before earning tenure.

His research in inorganic chemistry, published in several journals, continued until his death. He was not only a passionate teacher but also a caring mentor and friend to his students and colleagues.

As a researcher, Lance sought to find a catalyst that would purify water and leave nothing harmful or negative behind. “I believe that in many ways he himself was a catalyst, a positive agent of change, who improved countless student lives both in and out of the classroom,” said OWU President Rock Jones.

In his personal life, Lance was a baseball fanatic, first as a youth ballplayer, and later as a youth coach, umpire, rules interpreter, and, for many years, commissioner of the Great Lakes Summer Collegiate League. He was an avid Cleveland Indians fan.

Lance was also very involved in wrestling, having been a top-level wrestler in his youth. As a teenager, he was the first state wrestling placer from Wayne County, Ohio. Later in life, he was a loyal supporter of the Delaware Hayes High School wrestling team — often driving team members to off-season events, as well as helping to found the team’s Mat Backers Association. He also worked at the state wrestling tournament for many years.

Lance was born on April 11, 1960, in Wooster, Ohio, to James D. Lance and Naomi Myers Lance. After graduating from Waynedale High School in 1978, he attended the College of Wooster, graduating in 1982. He was the first member of his family to attend college. He earned a Ph.D. in chemistry from Ohio State University in 1988.

Former Students of Kim Lance Remembered Him Fondly on Facebook

Kathryn Kin ’14: One time I had a question for Dr. Lance and he said that it may have been easier to explain in person. Since the assignment was due the next day, he met me at the Tim Horton’s at 10 p.m. just to help me understand. He was passionate about his students and it showed.

Tammy Moseley Fitzsimmons ’00: His presence will surely be missed among both students and faculty/staff. My condolences to his family in the wake of this loss. I’ll never forget the morning he showed up for class dressed in a ratty t-shirt and pants. He’d come straight from the birth of his child and hadn’t had time to change. That’s how dedicated he was: even though he’d not had a bit of sleep, he refused to cancel class. Dr. Lance will be missed.

Jeffrey Barrett Donaldson ’04: Dr. Lance was incredible. I was a student with minimal science background; I’m a physician now. His encouragement and engaging teaching kept me going even when it was a tough slog, and now I do actually use chemistry every day.

For more on Dr. Lance or to share your own memory, visit the Ohio Wesleyan University Alumni Association Facebook page.