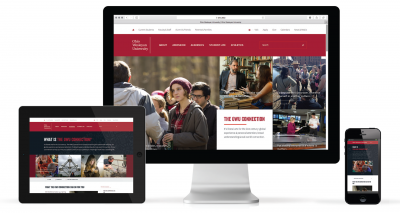 Ohio Wesleyan has a new front door on the Internet—and visitors are streaming through in record numbers.

On November 4, OWU launched a completely redesigned website for the first time in more than a decade. The new state-of-the-art site is fully responsive, which means that it adjusts automatically to look good on any-sized screen, from wide-screen laptops to smart phones and everything in between.

Visitors are praising the site’s visual appeal, improved navigation, and wealth of stories.

George Conrades ’61 said, “This is an outstanding communication of what OWU is all about, especially to prospective students, and a wonderful reminder to us as alumni why this University is worthy of our continuing support. Bravo! Go to the head of the class of modern communications.”

Because the site is mobile friendly, the number of people viewing the site with a mobile device has increased 50 percent. About one-third of the visits to the site are from a mobile phone or tablet. 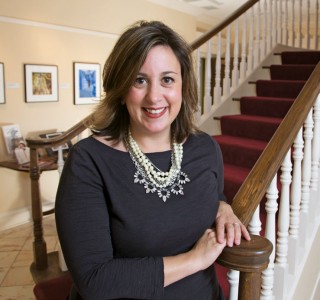 We’re excited to announce Katie Webster, CFRE, as our new Director of Alumni Relations. In her current role, Katie oversees the programs, engagement opportunities, and strategic vision of the Alumni Relations Office and is responsible for working in partnership with the Alumni Association Board of Directors.

Katie earned her B.A. from John Carroll University with a major in communications and has more than 17 years of experience in nonprofit settings and advancement leadership. Katie was previously the 50th Reunion Program Director.

“I’m excited and honored to serve in this role and look forward to building upon the strong foundation those before me have created to make a positive contribution,” says Katie.

“Ohio Wesleyan has a vibrant, talented, and diverse alumni community, and I’m eager to continue to advance and strengthen these relationships to engage more alumni with each other and the OWU community. It’s truly a great time to be a Bishop and to get involved.”

The conference, held Oct. 9-10 at Kent State University, featured presentations from faculty members, graduate and undergraduate students, and professionals from all fields of study in human geography, physical geography, and cartography.

Barnes is a geography major and Spanish minor from Champaign-Urbana, IL. His poster shared information about his research into “The Geography of Chicago’s Heat Island from 1995 to Today.” Barnes was mentored by geology-geography faculty member Nathan Rowley, Ph.D.

“In 1995, Chicago experienced a heat wave that killed over 700 people,” Barnes says, explaining that the severe weather was made worse by the “urban heat island effect,” a phenomenon in which cities become hotter than their surrounding areas.

“Since then,” Barnes says, “the city has implemented various strategies to reduce the heat island effect—more parks, trees, etc.—so with this project I wanted to investigate whether the difference in the intensity of the heat island between high- and low-income areas has been addressed by these initiatives.”

Knisley is a geography major from New Vienna, OH. His paper discussed his study of “Student Playgrounds: Alliances of Entrepreneurial Governance in the Creation of Student Spaces at Two Universities.” Knisley was mentored by geology-geography faculty member Nicholas Crane, Ph.D.

“My paper was examining the role that universities play in the creation of student spaces in the areas surrounding their respective campuses,” Knisley says.

Both students anticipate attending graduate school to pursue advanced degrees and both received Ohio Wesleyan-funded Student Individualized Project grants to support their experiences at the Association of American Geographers conference.

Founded in 1904, the Association of American Geographers is a nonprofit scientific and educational society featuring members from more than 60 countries who share interests in the theory, methods, and practice of geography. The East Lakes Division is one of nine U.S. divisions of the association and includes the states of Ohio and Michigan. 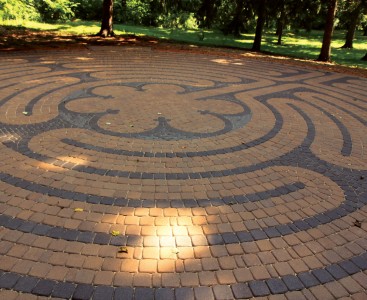 The paths to success at Ohio Wesleyan University now include 87 majors, 57 minors, and one stone labyrinth.

Thanks to generous donors, the University in August completed the installation of a 47-foot-diameter labyrinth inspired by one of the world’s oldest walkable labyrinths–an 800-year-old path at Chartres Cathedral near Paris, France. Both labyrinths feature rosette-style centers, resembling the intricate rose windows found in the gothic cathedrals of Northern France.

Ohio Wesleyan’s labyrinth includes 17,600 stone pavers, with about 30 percent of the stones being cut by hand. Located in a grove of trees between the newly renovated Merrick Hall and the Delaware Run, it is open to the public seven days a week during daylight hours.

OWU’s labyrinth was designed by well-known labyrinth architect Robert Ferré and installed by Debi and Marty Kermeen of Illinois-based Labyrinths in Stone. The labyrinth is slightly larger than its inspiration and is unique in that its pavers rest on a concrete base rather than being set directly into the ground.

Ohio Wesleyan’s labyrinth was dedicated in October, with the celebration including a lecture by Lauren Artress, founder of Veriditas, the World-Wide Labyrinth Project.

Artress, whose books include The Sacred Path Companion: A Guide to Walking the Labyrinth to Heal and Transform, spoke October 5 in Merrick Hall.

The goal of her California-based nonprofit organization is to “pepper the planet with labyrinths,” including a new initiative to create a series of interconnected “Veriditas Legacy Labyrinths.” Ohio Wesleyan’s labyrinth will be only the third such legacy labyrinth in the world. The others are located in La Falda, Argentina, and Jacksonville Beach, FL—and each contains a piece from the other two in support of an interconnected global community and peace.

Following the Oct. 5 lecture, everyone was invited to walk outside to the labyrinth for an asperging, or blessing with water. During the ceremony, guests dipped tree branches in water and sprinkled the stone pavers.

The labyrinth is a gift to the university from the family of OWU Life Trustee Kathleen “Kathe” Law Rhinesmith, Class of 1964.

“I’d like to believe it’s a place where each person who comes here will find something,” Rhinesmith says, “whether that be a casual and peaceful walk or a deeper moment of self-discovery and self-reflection. My wish is everyone who comes here will come away with some quiet new perspective on their life or the world around them.”