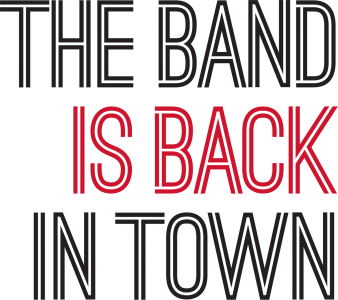 The marching band is taking the field again at Ohio Wesleyan and is ready to make some noise. After just five weeks of practice, the 31 men and women who make up the Marching Bishops performed a rousing halftime show during OWU’s season opener against Wooster on Sept. 15. The last time an OWU marching band strutted on the grass at Selby Stadium, John F. Kennedy was president, and it was 1961.

The band’s halftime routine for the season is on the nose. In a show titled “Back in Town,” the Marching Bishops pace through four songs – the theme from Back to the Future, “I Want You Back” by the Jackson 5, “I Won’t Back Down” by Tom Petty, and “The Boys Are Back in Town” by Thin Lizzy. (Get it?)

For the 1 p.m. game against Wooster, on a sunny day with temperatures pushing into the upper 80s, close to half of the home-side crowd appears to be there for the band (no offense to the Battling Bishops, who go on to win 9-7). For the halftime show, the fans cheer, clap, and listen attentively, then swap positive critiques.

But the band members are there to support the football team. Before the game, seated in the stands, they chant and cheer and crank up the crowd with music and general zaniness. The “William Tell Overture” is involved. Members alternate heckling opposition players with performing a selection of their “stand songs” like “Crazy Train” and stanzas from “Tell” to punctuate game action and timeouts.

As Wooster lines up to kick off, a drumroll emanates from the percussion section. All the band members join in with an anticipatory “Ohhhhhh …” as the kicker approaches the ball, and a loud “WOOOO!” when the ball is struck. It is music to the crowd’s ears.

The fanfare is the result of more than a year of planning and recruitment by Mary Kate McNally, who leads the band in mirrored sunglasses and with the personal passion of 1,000 pep bands. Coming on as Ohio Wesleyan’s director of marching and spirit bands in August 2017, she’s spent a year recruiting band members and prepping music, marching routines, and rehearsal plans. More than this, she’s working to reintegrate marching band into the campus and community culture, with appearances at Main Street Delaware’s “First Friday” celebration, the tailgate at Homecoming & Family Weekend, and a surprise celebration of President Rock Jones’ 10th anniversary at OWU.

McNally moves quickly and talks faster. “This is my dream job,” she says. “I got to make a band and people paid me to do it. It’s pretty awesome – I’m not going to lie. I really did luck all the way out.”

Most of the first year of her job was devoted to recruiting, visiting high schools, and attending music-educator association events to spread the word that marching band was returning to OWU. She also worked with the Office of Admission to identify incoming students with an interest, resulting in 24 first-year students in the band.

On the way to 76 trombones

Thirty-one is not a large number for a marching band. But it’s a long way from zero.

“That’s a good number to start with,” McNally says of her group. “And they’re really, really phenomenal students. Very focused, very driven. You don’t have to tell them a whole lot.”

McNally has worked with much smaller ensembles. The native of Monument, Colo., received her undergraduate degree in music education from Henderson State University in Arkansas in 2012. She moved back to Colorado to teach in public schools for three years before coming to Ohio to earn her master’s in music conducting at Kent State in 2017. Teaching in Colorado, “I was in a very rural town in a very rural district,” she says.

“My high school band at its largest when I was teaching there was 12. So anything over 20 was going to feel a bit like a vacation.”

McNally anticipates the numbers will grow as news of the band’s return spreads. The initiative to revive the Marching Bishops was launched in response to prospective student interest. The band is a club, operating within the University’s Division of Student Engagement and Success. As a club, class credit isn’t offered – and McNally says she’s sought to establish the band with the time constraints of her students in mind. “We have over a dozen academic departments represented in the band, which means that schedules vary widely from one student to the next. It was really important to me this first year to keep the time commitment super, super reasonable for those students that participate.”

The Marching Bishops practice three evenings a week, and performances are focused on home football games with appearances at other key events. The band was featured throughout Homecoming & Family Weekend and will march in the Delaware Christmas Parade in December.

After football season, the ensemble will switch gears to become the Bishop Basketball Band, a winter-season pep band that will rehearse just a couple of times a week and perform at home basketball games. Students are free to participate in one band or both.

Members of the band hail from all corners of the campus. All but a handful were leaders in their high school marching bands. More than a dozen academic majors are represented, but McNally aims to recruit widely. “(We have) literally everything from astrophysics to zoology. I feel like I want to be a Pokemon Master while I’m here, and try to ‘catch ’em all.’ We’ve got over 90 majors here, so ...”

Political science is represented by Danielle Black ’22, a first-year clarinet player from the small Ohio River city of Proctorville. Black plans a career in politics, as a politician or someone involved with campaigns. A concert band member since seventh grade, and marching band member since eighth, she says playing in OWU’s band is helping her feel at home. “It’s going really well. I like the family aspect the small group has, and it’s amazing to be a founding member of it.”

Aleea Ratcliff ’22, a first-year saxophone player from Fairborn, Ohio, near Dayton, is double-majoring in zoology and environmental studies, with an English minor. She was a little worried the football team would be mad at the band, but she says that didn’t happen. “We were just trying to have fun and get the team motivated. At most (high) schools, the relationship between the band and the team is not that great – but not here. Everyone is nice and we’re all excited,” Ratcliff says.

It’s been fun for the group with different musical and marching style backgrounds to come together. “I think it’s cool that we’ve changed some things (on campus). I think we’ll grow next year, in terms of size.”

Maddie Marusek ’22 is a first-year clarinet player from Gahanna, Ohio, where she marched in her high school’s 200-member band. But she says marching in OWU’s modest band was a great early introduction to the tightknit community she’s finding at Ohio Wesleyan. “I really like everyone. I feel like we were able to bond really quickly in band camp, and we all knew someone when school started,” Marusek says.

“My roommates say I do everything with band people, and it’s true – even trips to Walmart.”

To view a video of the new Marching Bishops performing at the season opener – and the 1951 band at Homecoming, visit owu.edu/marchingband.

Joe Meyer is a freelance writer from Westerville, Ohio.