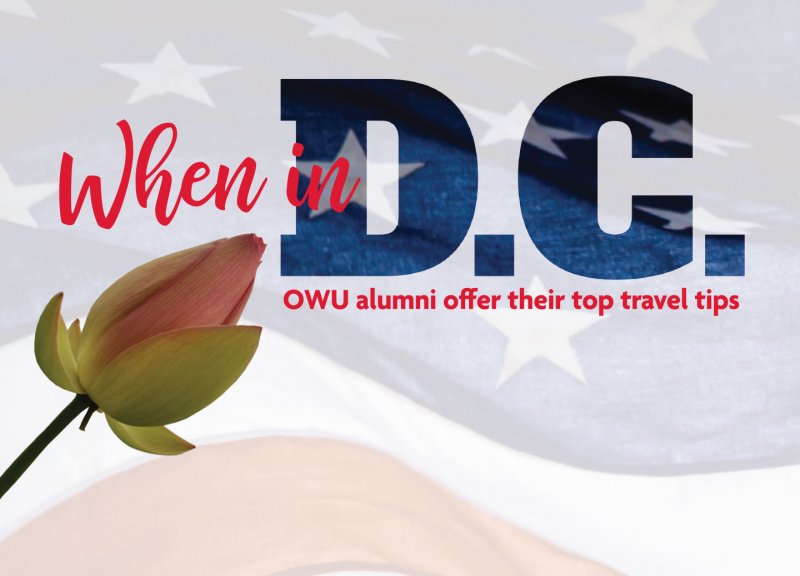 “The crown jewel of D.C. is the Smithsonian Institution,” Dyson says, which encompasses 17 museums and galleries, plus an urban zoo, all of which offer free admission. Stroll down the National Mall and explore the museums plus the Capitol Building, monuments, and large-scale events such as the annual spring Blossom Kite Festival. Dyson recommends securing tickets to the National Museum of African American History and Culture, the most recent addition to the Smithsonian network.

Plan a visit to the National Cathedral, “which is just as magnificent as any cathedral you’d see in Europe,” Headden says. Don’t miss city views from the tower, the 112 gargoyles, and the renowned stained-glass windows, including a stained-glass Space Window that holds a moon rock collected by Neil Armstrong.

Wander through the National Portrait Gallery to explore a museum of American biography, says Headden, who’s a docent there. “Every portrait tells a story about a person who helped shape our country — for good or ill,” she says. Rest and recharge in the gallery’s beautiful, sun-filled indoor courtyard.

Visit the Smithsonian’s Renwick Gallery, recommends Taylor, for its eclectic, funky vibe. Or buy tickets to immerse yourself at the digital, experiential, interactive art installations at ARTECHOUSE, Taylor advises.

Nooruddin recommends Dumbarton Oaks museum and gardens for its living history, where discussions about the formation of the United Nations took place in the 1920s. Stroll the spectacular gardens, where “it feels a bit like a secret garden in the middle of the city,” Nooruddin says. Follow it up with long meander through Georgetown University and Georgetown, with its “lush gardens and beautiful houses.” Dolan enjoys launching a rented kayak from Georgetown for a Potomac River paddle.

For world-class theater and performance — plus elegant interiors and city views — don’t miss the elegant and iconic John F. Kennedy Center for the Performing Arts. Find a modern mix of speakers and bands at The Anthem, where Dolan recommends seeing a show, located on The Wharf — a newly developed riverside stretch in Southwest. Hop a water taxi to Alexandria or National Harbor, advises Dyson, where you can ride the Capital Wheel, a 180-foot-high Ferris wheel.

Though the Capital’s best known waterway may be the Potomac River, its other major river, the Anacostia River, offers scenic beauty as well. “There’s Kenilworth Aquatic Gardens, boardwalks, bird-watching, and stand-up paddle boarding in a tranquil space,” Durham says.

For a truly D.C. literary experience visit Politics and Prose — “one of the very best independent bookstores in the nation, with an incredible inventory and knowledgeable salespeople,” says Headden, who highlights free readings by nationally-known authors.

Calio recommends Tosca restaurant and its Northern Italian fare. “It’s the best, most reliable Italian restaurant in town,” he says.

2amy’s Neapolitan Pizza in NW gets a thumbs up from Ryan and Taylor.

Durham favors El Sol Restaurante & Tequileria for inexpensive authentic Mexican cuisine, and Thai X-ing, where the chef serves up a flavorful nightly prix fixe menu. At the higher end, she recommends The Dabney for regional local dishes, including many foods roasted over a fire.

Savor fantastic classic Indian food at The Bombay Club, recommends Nooruddin, and you’ll find great ambiance and a likelihood of seeing a congressperson, due to its location near the White House.

“Old Ebbitt Grill has been a cozy destination for drinks at any hour,” says Leach, who favors the raw oysters.