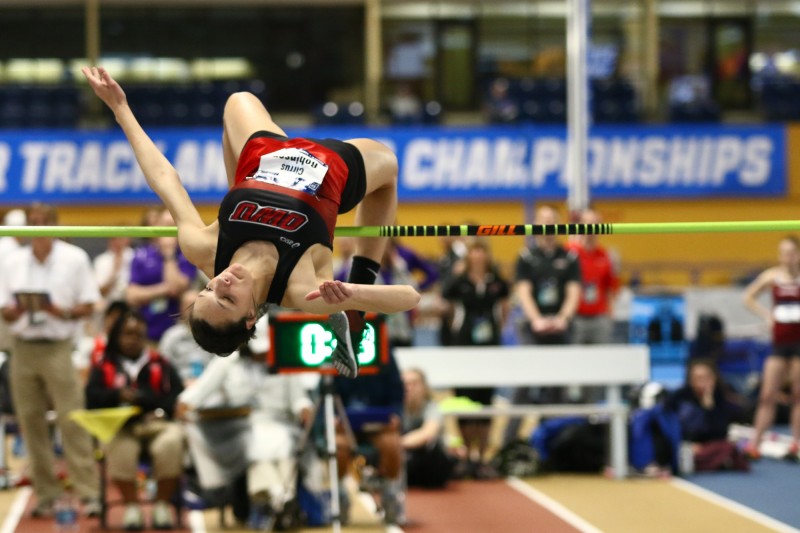 This time, the sequel was even sweeter than the original.

Kris Boey, head track and field coach, said, "Cirrus's second national title was in some ways even sweeter because she had to work at it harder. Despite battling a season-long hip injury, she was persistent and never compromised her goals."

Robinson, an Early Childhood Education major from Ashland, Ohio, cleared 5-8½ to win the national championship. She missed only once on her first six heights and cleared 5-8½ on her first attempt. The final three competitors, Robinson, 2017 runner-up Emma Egan of Williams, and Helene Hall of Williams, each missed all three attempts at 5-9¾, and tiebreakers determined the final standings, with Robinson winning the national championship, Hall finishing second, and Egan third.

"This competition was more of a fight for the podium, with first place shifting around between a few of us, which made the finale even more rewarding than last year," Robinson said. "I was the most grateful for another healthy season and the opportunity to compete with OWU's name on my chest."

"Cirrus has accomplished more in her first two years of collegiate athletics than most any student-athlete could dream of achieving over an entire career, yet she remains humble and hungry to continuing improving," said Boey. "Winning one NCAA championship is a rare feat, but rising to the top in consecutive years in truly special."

Robinson was one of four high jumpers who entered the meet with the nation’s top height of 5-7¾, which she achieved during the North Coast Athletic Conference championship meet last Saturday. She won the NCAC championship in the event, her second consecutive conference title.

Robinson’s national championship gave Ohio Wesleyan 10 points in the team standings, good for a tie for 20th place among the 105 schools that were represented in the meet.

"I admire Cirrus's drive and dedication to her sport and her team," said Boey. And while she has accomplished so much in her first two years, I believe the best is yet to come." 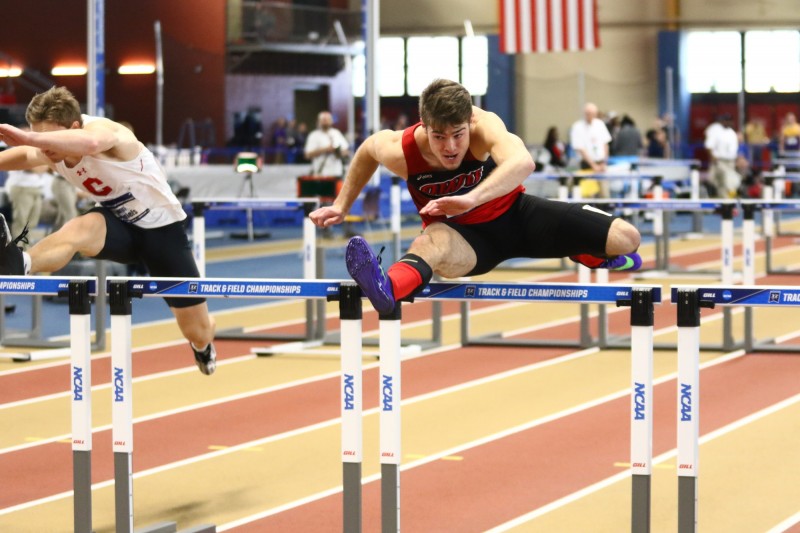 Senior Nate Newman won All-America honors in the heptathlon and came within an eyelash of the national championship.

Newman, from Chillicothe, Ohio, finished with 5,267 points, just behind Will Daniels of Central (Iowa), who scored 5,287 points. Newman's score broke Ohio Wesleyan school record of 5,155 set by Matt Hunter in 2014.

“This was by far Nate's most complete performance in the event, with times and marks better than or very close to his personal bests in all seven events,” said Boey. “Twenty points in the heptathlon is like a tenth of a second in the mile. It is a very small margin.”

Heading into Saturday's events, Newman trailed by nearly 200 points, but inched closer in the 60-meter hurdles, winning his heat in :08.42 to post the second-fastest time in the meet and pick up 879 points. Newman cleared 14-5¼ in the pole vault, tying for second overall and picking up 731 points to narrow the margin between him and first place to 21 points heading into the 1000-meter run, the final event. Newman finished the 1000-meter run in 2:52.69 to record 738 points, and while he finished ahead of Daniels, the margin was not enough to affect the final standings.

On Friday, Newman opened the day with a clocking of :07.27 in the 60-meter dash, good for fifth overall and 789 points. His leap of 21-4 in the long jump was sixth overall and added 697 points, and his throw of 41-1¾ in the shot put was fourth-best on the day and brought in 639 points. Newman saved his best performance for last on Friday, clearing 6-6¼ in the high jump to place second overall and collect 794 points.

The All-America honors were the second for Newman in the heptathlon, following a fifth-place finish in 2017. He was making his fourth consecutive NCAA Division III championship appearance in the event. Newman placed 11th in 2016 and 13th in 2015.

“Nate is among a very elite group of individuals who have qualified for the NCAA championships for four straight years in the same event,” said Boey.

“He represents the adage that persistence pays. Nate was disappointed with his first two national meets as a freshman and sophomore. He continued to work and improve in all seven events.  Nate broke through earning All-America honors in 2017. This year, he took another big step forward. We are all proud of Nate's persistence and commitment to improvement.”

Boey added, “This exceptional effort came on the heels of scoring 45 points at the NCAC Championships the week before, where Nate's outstanding efforts contributed to the team championship.”

Newman's second-place finish gave Ohio Wesleyan 8 points in the team standings, good for a tie for 30th place among the 99 schools that were represented in the meet.