“In our arrogance, we have come to imagine that we will someday conquer the stars, but the stars are far too distant for our entire species to travel there. ” 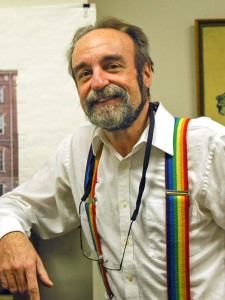 Today we celebrate Earth Day. This year’s celebration is decidedly different because scientists around the world have turned the day into a decidedly political event—a protest against the illogic of our times and a celebration of the rationality that science honors above all else.

They do so despite their fear that if they raise their voices in protest, they might lose their federal funding. Some others will sit the day out because they believe quite sincerely that science should look for facts and should thus be above politics.

But many scientists earnestly believe that now is the time to raise their voices. Federal regulations designed to protect us from ourselves may soon disappear. In our pursuit of admittedly desperate short-term needs, we may doom our grandchildren’s ability to prosper or even to survive.

Immersed as we are in life on our planet, we easily forget how small and fragile we are compared with the towering forces of nature that surround us.

We mistakenly think of ourselves as masters of the planet. We conclude that Earth's ecology is fragile, that our ill-conceived manipulation of the planet can somehow destroy it. But even the greatest of human-made cataclysms, a nuclear war, would not destroy Earth.

In time, even the scars of our folly would disappear, and Earth has plenty of time. It has existed for over 4 billion years. Even if it took a million years for the signs of a nuclear holocaust to be erased, that's only 1/5,000 of the time the Earth has left before the sun dies.

We are not the masters of Earth. Earth is our master. We depend on her, not she on us. She makes the rules and gives us life.

We are the fragile ones. The pollutants we dump into her air and soil and water are deadly to us but not to Earth. If we shift the delicate balance of forces that keep us alive, we will have created a new world order which makes our lives impossible, but Earth will go on just fine without us. Earth will abide no matter what we do. We must struggle, in spite of our sometimes violent and self-serving nature, to abide with her.

Earth is no more than a speck compared to the medium-sized star it orbits once a year. And the sun is but one of 300 billion stars in our Milky Way galaxy.

In our arrogance, we have come to imagine that we will someday conquer the stars, but the stars are far too distant for our entire species to travel there. Even at the fastest velocities that the laws of nature will allow us, the stars are still tens, hundreds, even thousands of years away by spacecraft using technology that still exists only in scientific imagination. And despite some very tentative discoveries to the contrary, there's no telling whether we would find suitable planets there if we went.

We may someday reach the other planets of our solar system, but they are uninviting places, unsuitable to our life and far too difficult to exploit for our needs.

We must assume for the purposes of our own survival that Earth is all we have. In our most supreme arrogance, we have come to assume that our race will last forever—that we will outlive the mighty dinosaurs and the even-mightier cockroach, which has been around for at least 300 million years.

In our current form, we have been on Earth for less than 100,000 years. We first built cities only 5,000 years ago. We began to destroy our relationship with our planet less than 200 years ago, a drop in the cosmic bucket compared to the 13.8 billion years the universe has been around.

Despite our youth and puniness, we do have one special quality that makes us more powerful than a star and vaster even than a galaxy of 300 billion stars. A star is brainless. A galaxy can never know its vastness or appreciate with wonder the fragile thing called life.

We alone in our little corner of the universe have the power to know those things.

If we can turn our futile attempt to master the planet into a quest to master ourselves, if we can use our power to know and our power to love to protect our fragile place in the cosmos, perhaps then we will have given back in some small measure the gift of life with which the universe and its creator, if so you believe, has blessed us.

Tom Burns is a part-time professor of English and director of Perkins Observatory at Ohio Wesleyan University.