During my 14 years here at Ohio Wesleyan University, I have taught a course titled “Freedom and Constraint.” I have taught the course about five times, and each time I update it to reflect current debates about identity politics. In the past the course has covered examples of oppression from around the world. This year, the course is focused solely on the United States.

Despite the revisions to the course, two aspects have never changed. The first is how I begin the course. I start with the Statue of Liberty and the 1883 poem by Emma Lazarus, whose words are cast in a bronze plaque at the base of the grand icon of an American ideal. Sadly, few of my students have heard of this poem. In my class, students read the poem and they learn who Emma Lazarus was. I show images of Eastern European Jews, Italian, and Irish immigrants, all peasants getting off boats that have crossed the Atlantic to Ellis Island. As my students read the famous final lines,

Give me your tired, your poor,
Your huddled masses yearning to breathe free,
The wretched refuse of your teeming shore.
Send these, the homeless, tempest-tost to me,
I lift my lamp beside the golden door!

I think of my own paternal relatives, my great-grandfather, an orthodox rabbi, and his family, who came here to flee the pogroms in Bialystok, Poland.

The other section of the course that has never changed is the one I will start teaching next week. While I start the course focused on an ideal that no other country has and one which I cherish, the next section is about the breeches of that ideal. This semester my students have already read works about Native Americans (Bury My Heart at Wounded Knee and Love Medicine) and African Americans (Uncle Tom’s Cabin and Invisible Man). Next week, we will read about the internment of Issei (first-generation Japanese immigrants) and their Nisei children (second-generation American citizens), who were all interned in the relocation camps after President Franklin Roosevelt issued Executive Order 9066 on February 19, 1942. For this section, my students will read John Okada’s No-No Boy (1957), considered a classic of Asian American literature and the only published work Okada wrote.

A new reading added to the course will be Frank Chin’s play The Chicken Coop Chinaman (1972). It was the first play written by an Asian American to have a major New York Production. There is a connection between the two. Both are works about Asian American male identity.

This section of the course is personal for me. I did not learn about the internment camps, or anti-Asian and anti-miscegenation laws in school. I learned about them at the dining room table of my childhood home as my father told me about his brother, my Uncle Eric. 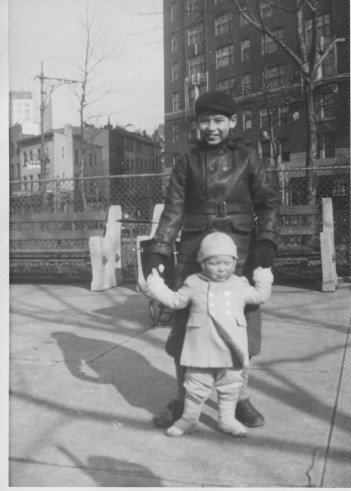 The photo of my father and uncle shows a picture of two boys. One would probably not think they were related, but they were. When I teach my students about America’s anti-miscegenation laws, I show this photo and tell the story of how my uncle and his mother were not welcomed in this country when they arrived here in 1931. My grandfather had lived in Shanghai as a journalist for a little over a decade. While there he met and fell in love with a Chinese woman who had been raised in Jamaica and traveled on a British passport. In 1922, they were married in a Jewish synagogue in Shanghai. She converted to my grandfather’s faith.

He wrote about his marriage for the Atlantic Monthly in 1931. The title was “My Mixed Marriage.” Two years later when my uncle was only seven years old, his mother died, and my grandfather remarried. His second wife was not Chinese. For the rest of my uncle’s life he was raised in a home in which he looked and felt like an outsider. As my father once told with great sadness, he believes one of the reasons he and his brother were never really close was not so much because of the age difference, but more because my father’s physical features reminded my uncle of everything he was not.

But the family lessons do not stop there. My father also often talked about Anne and Grace, two women of Japanese descent who worked for my grandfather. Their father had owned a fishing boat in Los Angeles before they lost everything during the war when they were sent to an internment camp in the American desert. On August 21, 1945, my grandfather wrote a piece titled “Nisei” for his syndicated column “These Days.” He wrote about the “lawless act” this country committed in 1942, when American citizens were rounded up, sent away, and their constitutional rights taken from them.

“They were herded into concentration camps,” he writes, “under humiliating and unjust circumstances.” His syndicated column was published in over 300 papers across the United States, and many of his fans were conservative, but that did not stop him from stating that what had been done to American citizens of Japanese descent was unlawful and unconstitutional. In my own scholarship, I have written a book and several articles about the Issei and Nisei plight here in the United States. All of this is shared with my students.

I teach this because despite my supposedly good education in a diverse public high school in a diverse neighborhood in a diverse city, I was never formally taught anything about the hatred some people have in this country toward people of Asian descent. People today seem shocked that this hate exists, that somehow it is new. Yet, my grandfather spoke about it in the 1930s and 1940s through his journalistic pen. My father spoke about it in the privacy of my childhood home in the 1970s. Now I am trying to do the same in my courses here at Ohio Wesleyan. 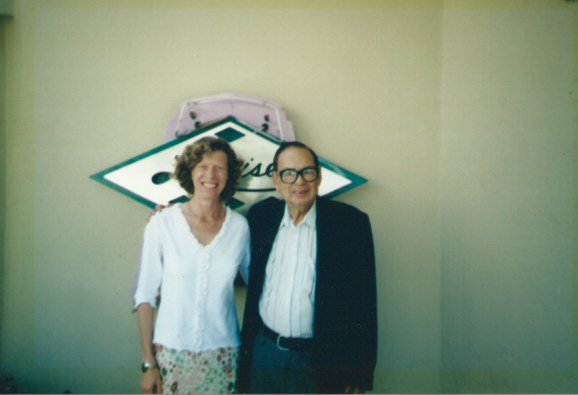 Next week I will dedicate these lessons of mine to my Uncle Eric (pictured here with me in 2003), and to the eight women in Atlanta, six of whom were Asian, whose lives were senselessly lost because of racist hatred.

Anne Sokolsky is a Professor of Comparative Literature focusing on modern Japanese literature. Her book From New Woman Writer to Socialist: The Life and Selected Writings of Tamura Toshiko from 1936–1938 (Brill, 2015) is about one of Japan’s early modern feminist writers who spent two decades living in North America in the 1920s and 1930s.