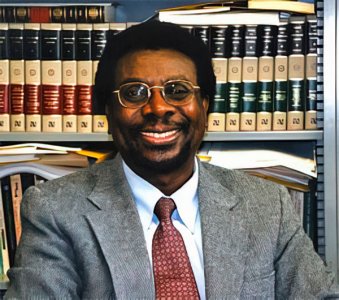 Known affectionately by his students as E-T, Emmanuel Kalenzi Twesigye has mentored and inspired over three decades of Ohio Wesleyan graduates. Born in Kambuga, Uganda, as the eldest son of an Anglican rector and tribal king, he is an ordained Anglican priest. He holds seven higher degrees culminating in a Ph.D. from Vanderbilt.  Before coming to OWU, he served at Kyambogo and Makerere in Uganda and at Suwanee, Fiske, and Vanderbilt in Tennessee. At Ohio Wesleyan he has taught broadly in global theologies and ethics while publishing nine books on religion, politics, theology, and millennialist cults in East Africa and globally.

Professor Twesigye was born in Kambuga, British East Africa in 1948. After local schooling, he attended East Africa University (Dip.Th.), was ordained an Anglican priest, and proceeded to Makerere University (B.A. Honors & Dip.Ed.).  Serving there as chaplain, he ran afoul of Idi Amin and was compelled to flee from Uganda in the dark of night. Through Anglican auspices, he was placed at University of the South, where he served chaplain’s duties and earned the STM degree. Then he attended Vanderbilt, earning M.A. and Ph.D. degrees.

Dr. Twesigye’s professional positions range from chaplaincy at Kyambogo and at Makerere Universities in Uganda, through professor of religion at Fisk University, through three decades as professor at Ohio Wesleyan, and now full-circle back to Africa. He is taking up duties as president of the Uganda Christian Health and Medical Institute and as director of his eponymous Research and Retreat Center in Kambuga, Uganda.

Amidst his first love—introducing students to the pleasures and pains of serious theological reflection and ethical decision making, Emmanuel Twesigye has maintained an active research and publishing career. He is currently working on two books: one on church and state in Uganda and one on the millennialist Apostles of Doom in East Africa. These follow the nine books that he published between 1987 and 2019. Their topics range from global theological and ethical questions to focused studies on the Mary’s Saints Movement in East Africa.

On campus, Professor Twesigye has served in leadership of the Religion Department, Black World Studies, SUBA, Rafiki Wa Afrika, King Day Committee, and numerous faculty committees. Externally, he has led the Ohio Academy of Religion and the DEVED organization, and he has served as interim priest for several central Ohio Episcopal churches. Such involvement twice earned him at Baccalaureate the Bishop Kearns Award for “faculty commitment to the ethical, spiritual, and missional values of Ohio Wesleyan.”

Emmanuel married Beatrice in 1976, and they have four daughters: Joy, Grace, Gloria, and Peace. Beatrice and three of the daughters hold Ohio Wesleyan degrees. All four daughters are now happily settled in professional lives throughout the eastern United States and have, so far, endowed the Twesigyes with two grandchildren.

For 32 years, Ohio Wesleyan has been blessed to enjoy the talent, commitment, insights, and dry wit of Emmanuel Twesigye. Wherever the future may take him, his colleagues hope “E-T” will always call OWU home.