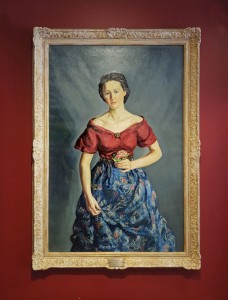 Club dues go toward a Columbus Monnett Club Scholarship and the Clara Nelson Emergency Fund, named after Clara Nelson 1872, the chair of the French Department for 31 years and founder of the Monnett Day celebration, which took place annually on May Day.

Monnett Hall became the designated building for the Ohio Wesleyan Female College before the the school merged with OWU in 1877. Monnett Hall then became the primary women’s dormitory at OWU until 1968. A portrait of Mary Monnett, by Emerson Burkhart ’27, now hangs in the Monnett Room in the Mowry Alumni Center, along with the stained glass windows from the hall, which was razed in 1978. A memorial garden was planted in its place. Meg Deeter ’17 used a Theory-to-Practice Grant to create an apiary near the garden, helping flower growth and the local honeybee population.