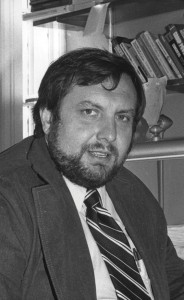 Carl Pinkele, the Honorable Charles W. Fairbanks professor of politics and government from 1976 to 2010, died May 30 in Haymarket, Virginia. He was 77.

Pinkele served as chair of the Politics and Government Department and was director of the Arneson Institute for Practical Politics and Public Affairs for more than two decades. In the latter role, he organized frequent lectures and roundtables on political issues, featuring leading figures from academia, journalism, and government. He also helped arrange countless internships for students in the Wesleyan in Washington Program, which he created.

He taught courses in American politics, comparative politics, racial politics, environmental politics, and political theory. After leaving OWU, he served as a visiting fellow of the Hoover Institution at Stanford University. He has also served as an advisor and consultant to political candidates across the country.

Pinkele was known as a demanding professor, but his sense of humor was legendary with students and faculty alike. At one point, students created a Facebook page dedicated to his witty comments and retorts from their classes. He also enlivened Mock Convention debates with his pointed challenges to the proposals and authority of other speakers.

Pinkele is survived by his wife, Barbara, who worked at the University for many years in the English Language Program and the Writing Resource Center, and by their daughter, Abigail. His family suggests those who wish to may make gifts to the Wesleyan in Washington Program in his honor.