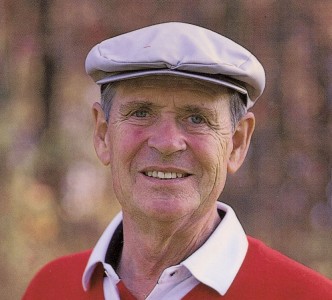 Richard D. Gordin, who coached at Ohio Wesleyan University for 39 years and remained active in the Ohio Wesleyan and golf communities for another 25 years as a mentor and invaluable resource, died March 29. He was 89.

Jon Whithaus ’91, who played for Gordin and later coached the Battling Bishop men’s golf team, said: “Dr. Gordin changed the course of so many lives over his decades of service dedicated to guiding the development of the many young people who had the honor of being associated with him. … He set a standard of excellence through his own personal conduct, which consistently allowed his genuine desire to help others excel.”

Jamie Green ’93, who was a member of Gordin’s final Ohio Wesleyan team and is now the men’s golf coach at Duke University, said “I remember when I first looked at the possibility of coaching, I went to a coaching convention and there were like nine coaches who had played for Dr. Gordin at Ohio Wesleyan, and that made me realize the impact he had upon us. …I will remember with great fondness his gentle nature. When you were around him, you felt important. At the same time, he was a very passionate competitor.”

Ohio Wesleyan men’s golf Coach Ian Miller ’99 said: “Dr. Gordin epitomized the term gentleman, and his soft-spoken intensity was an incredible trait that touched everyone. His accomplishments as a collegiate coach, administrator, and competitor are too numerous to mention, but they are highly overshadowed by his accomplishments as a husband, a father, a mentor, and friend. Ohio Wesleyan was graced with ‘Doc’s’ amazing presence for 65 years. He will be missed dearly by the OWU community, but his legacy will never be forgotten.” Gordin served as director of the Physical Education Program at Ohio Wesleyan from 1960 to 1967, as associate chair of the Physical Education Department from 1967 to 1970, and as cochair of the department from 1971 to 1977.

In 1966, he earned his doctorate from The Ohio State University, completing his dissertation on the life and career of legendary golfer Bobby Jones and becoming one of the foremost authorities on Jones.

He became Ohio Wesleyan’s athletics director in 1977, overseeing the development of the Branch Rickey Center and remodeling of Edwards Gymnasium and Pfeiffer Natatorium.

Gordin also helped develop the North Coast Athletic Conference, the first intercollegiate athletic conference in the country to treat men’s and women’s sports equally at its inception, with Ohio Wesleyan becoming a charter member in 1983.

Gordin returned to full-time teaching, coaching, and writing in 1985. In 1994, Gordin was only the eighth person to receive the Golf Coaches Association of America’s Honor Award. He was inducted into the Ohio Wesleyan Athletics Hall of Fame in 1993.

He was a charter member of the Intercollegiate Golf Coaches Hall of Fame, was president of the Golf Coaches Association of America, and served as historian and archivist at Muirfield Village Golf Club in Dublin, site of the annual Memorial Tournament.

A native of South Charleston, Ohio, Gordin graduated from Dublin High School, then served in the U.S. Navy from 1946 to 1948.