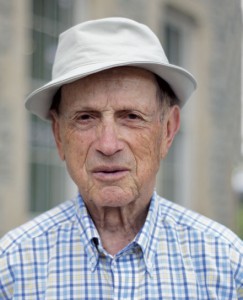 Professor Emeritus Harry Bahrick will receive the Association for Psychological Science’s Mentor Award at the group’s annual convention in San Francisco in May.

Bahrick, the former Helen Whitelaw Jackson Professor of Psychology, joined the Ohio Wesleyan faculty in 1949 and retired in 2006. He is one of three recipients this year of the APS Mentor Award, which recognizes psychology researchers and educators who have shaped the future direction of science by fostering the careers of students and colleagues.

Bahrick is nationally known for his pioneering research into the maintenance of long-term memory. His work is cited frequently in introductory psychology textbooks and has been the subject of articles in popular magazines including Psychology Today and Science News.

In 2013, he co-authored a book with OWU psychology Professor Lynda Hall and former associate professor of psychology Melinda Baker summarizing more than 50 years of research on maintenance of knowledge.

During his career, Bahrick published more than 70 articles on learning and memory, and received numerous grants from the National Science Foundation and the National Institutes of Health to investigate human memory and the maintenance of knowledge throughout the human lifespan.

Bahrick also was the 1994 recipient of the American Psychological Foundation Award for Distinguished Teaching in Psychology.